How African Spirits Were Born 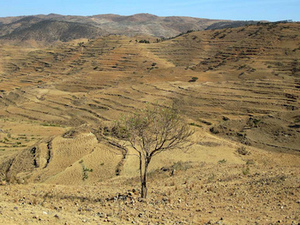 The following fable appeared in Passages: Africa, the first issue of PEN America’s translation journal, Glossolalia. Glossolalia advocates for writers with limited access to the global reading community. By publishing works from lesser-translated languages, Glossolalia connects storytellers to audiences eager for a vivid, mind-expanding look at experiences unlike their own.

“How African Spirits Were Born” by Ribka Sibhatu was translated by André Naffis-Sahely from the original French.

Eritrean literature has been handed down through the generations in the form of aulòs, the Tigrinya term for bardic songs, which are performed at public and private celebrations as well as during religious rites. Performers always begin their tales by invoking the word Şïnşïwai, which roughly means, “I have a story to tell,” to which the audience replies Uāddëkoi şęlimai, “We’re ready, we’re listening.” Sibhatu learned her craft in Asmara and Hemberti, her ancestral village in the high plateau, where these stories can be traced back for centuries. “How African Spirits Were Born,” the first fable presented in this selection, is popularly believed to be based on actual events and is thus performed without the usual introductory formula Şïnşïwai. Eritrean tradition holds that spirits embody human forms and can be both malign and benign; for instance, the latter are thought to reside in pools of water, where people bathe in order to purify themselves and cure their illnesses. To this day, many claim to have seen spirits wandering through their homes or their villages, which explains why many are afraid to walk alone, especially at night, lest they fall victim to spirits less kindly inclined.

Once upon a time, there was a strong, wise emperor named Mersò, who ruled over the most powerful empire in Africa. When old age came knocking at his door, he summoned his firstborn son, who was his designated heir, and told him:

“Miren, my son, hear me. I have nourished my body long enough and now wish to make my peace with God and tend to my soul. The art of governing and the sense of responsibility it has imparted me tells me you are not suited to the wielding of power and that it would be best if your younger brother Gemel ruled in your stead.”

“But this is absurd!” Miren exclaimed. “I’m your firstborn, how could you possibly crown him instead of me?”

His father replied, “Have you thought this through? And considered the consequences?”

“Yes!” his son answered. “If you don’t honour my wishes, it’ll mean there’s no justice in this empire.”

“So be it,” his father concluded. “As such, I will divide the empire between you.”

Emperor Mersò thus carved up the empire between his sons, and retired from public life to lead a hermit’s existence. Far removed from royal pomp, he spent many years devoted to prayer and dined solely on herbs, roots, and wild berries: all in the quest to tend to his soul. However, Miren harboured great anger and resentment. Finally overwhelmed by it, he decided to kill his brother and thus be recognised as the sole, undisputed ruler of the empire! He paid Gemel a visit and told him:

“As such, I should have inherited the entirety of the empire, but our father insisted on dividing it. However, it’s time to rectify this: I want to kill you and seize all power for myself. Nevertheless, I don’t ever want anyone to say I won it through subterfuge, and so prepare yourself for war. I’m coming for you.”

Even though he now lived in the forest, the heavenly messengers warned the old emperor of what was about to happen in his lands. The emperor therefore decided to visit his sons. Once he’d arrived, he told them:

“What do you lack? Why are you fighting? I settled this matter before leaving you and now I’ve returned to broker peace!”

“I have no wish to settle!” Miren exclaimed. “Your solution meant there could never be peace! I should have been the sole ruler, but you forced me to share it with your son.”

“Is that your final judgement?” his father asked.

“You wish to wield power alone?”

“Will you be able to handle it?”

“Of course, why wouldn’t I? What does he have that I don’t?”

“If that’s the way you see it, then you must choose! Do you want to govern the visible world, or the invisible one?”

“If that’s the way it has to be, then I choose the invisible world!”

Thus it came to pass. From that day forward, the emperor’s eldest son and his followers became invisible: that’s how African spirits were born, and ever since, they have fed on the food prepared by human beings.

Ribka Sibhatu is an Eritrean poet who writes in Tigrinya and Italian. Born in Asmara in 1962, she was imprisoned for a year in 1979 due to her political activism and fled the country in 1980, moving first to France and then to Italy. Her publications include Aulò! Bardic Poems from Eritrea (Sinnos, 2009) and The Exact Number of Stars and Other Eritrean Fables (Sinnos, 2012). She was selected to represent Eritrea at the Poetry Parnassus held in conjunction with the London Olympics in 2012. Her poems were then translated and anthologized in The World Record (Bloodaxe Books, 2012).

André Naffis-Sahely‘s poetry has been featured in The Best British Poetry 2014 and the Oxford Poets Anthology (Carcanet, 2013). Recent translations include The Physiology of the Employee by Honoré de Balzac (Wakefield Press, 2014), The Selected Poems of Abdellatif Laâbi (Carcanet, 2015), which won a PEN Translates! Grant from English PEN, and Money by Émile Zola (Alma Classics, 2016).