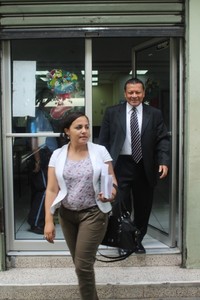 Persuading the Honduran government to comply with the IACHR ruling has taken more than 13 months, and is the latest development in a nine-year-long legal battle stemming from a criminal defamation lawsuit brought against Alvarado in 2006 by a public official accused of wrongdoing.

‘We are pleased that Julio Ernesto Alvarado is now free to return to the airwaves and his viewers after a six-week hiatus – but he should never have been prevented from working as a journalist in the first place,’ said Jennifer Clement, President of PEN International.

‘Although PEN International welcomes the lifting of the ban on Alvarado’s work, to have put him through 13 months of unnecessary uncertainty and stress is unacceptable. We hope this is an indication that the Honduran state is finally taking its international human rights responsibilities seriously,’ added Salil Tripathi, Chair of PEN International’s Writers in Prison Committee.

The 16-month work ban, formally imposed on Alvarado on 29 October as part of a 2013 criminal conviction for alleged defamation, was formally lifted following a court hearing in the Honduran capital Tegucigalpa on 11 December 2015. The hearing was originally due to take place on 17 November butwas delayed, reportedly due to a death in the judge’s family.  The court also ruled that all relevant state and professional bodies be informed of the lifting of the ban. Alvarado returned to presenting his programme ‘Mi Nación’ (My Nation) on 13 December.

According to court documents, all parties to the hearing on 11 December fully recognised the legally binding nature of Honduras’ international human rights commitments in domestic law, and therefore of the IACHR’s order to suspend the work ban on Alvarado as a part of ‘precautionary measures’ awarded to him on 5 November 2014. Consequently, both the Public Prosecutor’s office and the plaintiff’s legal counsel agreed to the Attorney General’s 2 November request to suspend the work ban. The Attorney General’s hand had been forced by a meeting convened by the IACHR on 21 October at PEN’s request – a meeting that Julio Ernesto Alvarado himself was prevented from attending.

‘If the political will displayed in the 11 December hearing had been generated before Julio Ernesto Alvarado was suspended from working as a journalist, the Honduran state could have avoided showing itself to be disrespectful of its international commitments, and the arbitrariness of suspending him would not be a fait accompli,’ said Dina Meza, President of PEN Honduras, who has accompanied Alvarado throughout his ordeal.

‘Unfortunately, given the lack of justice in Honduras, we must pursue this case through the Inter-American system. We hope that it will set a precedent so that this episode, so damaging to freedom of expression, will never again be repeated.’

The suspension of the work ban is temporary, until the IACHR has investigated a petition made by Alvarado in July 2014 alleging violations of his rights to freedom of expression, a fair trial and judicial protection stemming from his conviction for criminal defamation. The IACHR is expected to decide on the admissibility of Alvarado’s petition in early 2016.

‘The Honduran justice system has to realise that it cannot violate fundamental rights and neglect its international human rights commitments,’ said Kenia Oliva, Alvarado’s lawyer and also a member of PEN Honduras. ‘Julio Ernesto Alvarado’s case is just one of hundreds of cases where political and economic power prevails and where judges use their rulings to favour their “friends” and forget their duty to see justice done.’

PEN International welcomes the Honduran state’s implementation of the precautionary measures and urges it to cooperate fully with the IACHR in its investigation of Alvarado’s petition.

Director and presenter of the news programme ‘Mi Nación’ on the independent station Globo TV, Alvarado was originally sentenced on appeal in December 2013 to 16 months in prison and a ban on practising journalism for the same period as a result of a criminal defamation lawsuit brought by Belinda Flores, dean of the Economic Science Faculty of the National Autonomous University of Honduras (Universidad Autónoma de Honduras – UNAH). Alvarado had covered Flores’ alleged involvement in influence peddling and falsification of university degrees in three editions of ‘Mi Nación’ in 2006.

Alvarado and two university teachers who had appeared on his show to discuss the allegations were cleared of the charges in March 2011. However Flores appealed the decision and in December 2013 the Supreme Court of Justice in Tegucigalpa convicted Alvarado of criminal defamation – despite the fact that the non-guilty verdict was upheld for the two teachers and that the Court took as proven that Flores was in fact implicated in some wrongdoing.

Following his conviction, Alvarado was subject to harassment and threats in early 2014, including a death threat against him and his family made via social media. He had previously endured months of threats and harassment which culminated in a suspected attempt on his life, and which led him to suspend his radio programme on Radio Globo in March 2013. These attacks are yet to be investigated, let alone prosecuted.

As a result of this intimidation and a lack of faith in the impartiality of the justice system, Alvarado decided not to appeal his conviction, opting instead to pay a fine in order to avoid imprisonment. As a result the ban on practising journalism was also lifted in April 2014. However, Flores’ lawyer successfully appealed against the lifting of the ban.

In mid-2014, PEN Honduras and PEN International turned to the IACHR to request protection for Alvarado. On 5 November 2014 the IACHR issued precautionary measures compelling the Honduran state to suspend the implementation of the work ban until the IACHR had investigated Alvarado’s petition alleging violation of his rights by the state.

However, despite the IACHR ruling, the work ban came into effect on 30 October 2015 after Alvarado lost his final appeal at the Honduran Supreme Court in September.