Guantánamo Diary: An Evening of Reading and Conversation 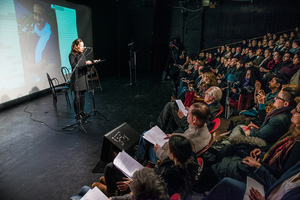 When asked recently about an innocent man who had been tortured to death in an American “black site” in Afghanistan, former Vice President Dick Cheney replied, “I’m more concerned with bad guys who got out and released [sic] than I am with a few that, in fact, were innocent.”

This week, authors, activists, and PEN Members ranging from Lili Taylor to Andrew Solomon to Ayana Mathis and poet Eileen Myles took the stage in front of a packed house at Theatre 80 for a unique reading to give voice and a feeling of physical presence to Mohamedou Slahi, author of the recently released Guantánamo Diary—a book Mark Danner called the “most profound account yet written of what it is like to be the collateral damage of the United State’s War on Terror.”

Taken into custody in 2001 in Mauritania, Slahi was sent on what he called an “endless world tour” via “extraordinary rendition” to a black site in Jordan, where he was brutally interrogated for eight months; to Bagram Air Base in Afghanistan, for another two weeks of interrogation; and finally, to Guantánamo, where he underwent months of isolation, weeks of sleep deprivation, and other elaborate tortures set out in a “special plan” approved personally by Secretary of Defense Donald Rumsfeld—and where he remains to this day, without charge, despite orders for his release.

Slahi wrote his memoirs in his isolation cell in the summer of 2005. After a six-year legal battle and several rounds of redactions, the book was finally published in January 2015, edited by former PEN American Center Freedom to Write Director Larry Siems.

“It should be Mohamedou telling us his story,” Hina Shamsi, director of the ACLU National Security Project and a member of Slahi’s legal team, noted in her opening remarks at Theater 80, “but until that day happens, we have the gift of his words.”

Siems and Hollander recounted their experience fighting for the publication to be released, even if censored to the point of absurdity. The physical text features more than 2,500 black-bar redactions, and is rife with sentences like “’I know you don’t know [REDACTED], but you know people who know [REDACTED],’ said [REDACTED].”

These redactions, and Slahi’s remarkable and resilient sense of humor, moved the audience to laughter, and served to humanize a man surviving in a situation where people are made to be “un-people,” in Molly Crabapple’s words.

One patron promised, after purchasing a copy of Guantánamo Diary with a reproduction of Mohamedou’s signature on the title page: “I’m going to keep it, and get him to sign it again when he’s released.”

You can join the fight to Free Slahi by writing or tweeting to your elected officials to drop the state’s habeas corpus petition with the hashtag #FreeSlahi.

Do you know how to spot #disinformation on social media? Check out @PENamerica resources. Take the quiz. #Election2020 #WhatToExpect2020 https://pen.org/campaign/what-to-expect-2020/

@PENamerica’s Disinformation Toolkit is outstanding. It covers every base. Check it out! https://twitter.com/attorneynora/status/1321220220170764293