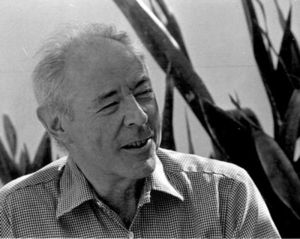 “Tell me how Ossip makes love,” Oliveira whispered, putting his lips hard against La Maga’s. “The blood is rushing to my head, I can’t do this much longer, it’s frightening.”

“He does it very well,” La Maga said, biting his lip. “Much better than you and much longer.”

“But does he retilate your murt? Don’t lie to me. Does he really retilate it?”

“A lot. Everywhere, sometimes too much. It’s a wonderful feeling.”

“And does he make you put your plinnies in between his argusts?”

“Yes, and then we trewst our porcies until he says he’s had enough, and I can’t take it any more either, and we have to hurry up, you understand. But you wouldn’t understand that, you always stay in the smallest gumphy.”

“Me or anybody else,” Oliveira grumbled, getting up. “Christ, this mate is lousy, I’m going out for a while.”

“Don’t you want me to keep on talking to you of Ossip?” said La Maga. “In Gliglish.”

”I’m getting sick of Gliglish. Besides, you haven’t got any imagination, you always say the same things. Gumphy, that’s some fine invention. And you don’t say ‘talking to you of.’ “

“I invented Gliglish,” La Maga said resentfully. “You come out with anything you want and sound like a million dollars, but that’s not real Gliglish.”

The tale begins in March on a night as dark as night can get when a person is asleep. The peaceful way in which time was passing could be seen in the high passage of the moon across the sky. Then later on, much deeper into night, the moon too disappeared.

There was nothing now to distinguish Martim’s sleep from the slow and moonless garden. When a man slept so deeply, he came to be the same as that tree standing over there or the hop of a toad in the darkness.

Some of the trees there had grown with rooted leisure until they reached the top of their crowns and the limit of their destiny. Others had burst out of the earth in quick tufts. The flower beds had an order about them that was concentrating in a great struggle to achieve some kind of symmetry. Although this order was discernible from up on the balcony of the large hotel, a person standing at the level of the flower beds could not make it out. The driveway, detailed in small cut stones, lay between the flower beds.

Off in one turn of the drive the Ford had been parked for so long a time that it was already part of the great interwoven garden and its silence.

By day, however, the countryside was different, and the crickets, vibrating hollow and hard, left the entire expanse open, shadowless. All the while there was that dry smell of crumbling stone that daytime has in the country. Yet on that very day Martim had been standing on the balcony, uselessly obedient, so as not to miss anything that was going on. Before one’s eyes reached the beginning of the road, which disappeared into the dust suspended in the sunlight, there was only the garden to be contemplated, comprehensible and symmetrical from up on the balcony, tangled and confused when one became part of it—and the man had been playing for two weeks now with what he could remember of it, carefully nurturing it, saving it for eventual use. For any other kind of attention, however, the day was untouchable, like a point designed upon the point itself. The voice of the cricket was the very body of the cricket, and it told nothing. The only advantage of daytime was that in the bright light the car was becoming a little beetle that could easily get to the highway.

But while the man was sleeping, the car was becoming enormous in the way that an idle machine is gigantic. And at night the garden was filled with the secret weaving that darkness lives on, work whose existence is suddenly made clear by fireflies. A certain dampness also betrayed the secret of the work. And night was an element in which life, by becoming strange, became recognizable.

Many years later, as he faced the firing squad, Colonel Aureliano Buendía was to remember that distant afternoon when his father took him to discover ice. At that time Macondo was a village of twenty adobe houses, built on the bank of a river of clear water that ran along a bed of polished stones, which were white and enormous, like prehistoric eggs. The world was so recent that many things lacked names, and in order to indicate them it was necessary to point. Every year during the month of March a family of ragged gypsies would set up their tents near the village, and with a great uproar of pipes and kettledrums they would display new inventions. First they brought the magnet. A heavy gypsy with an untamed beard and sparrow hands, who introduced himself as Melquíades, put on a bold public demonstration of what he himself called the eighth wonder of the learned alchemists of Macedonia. He went from house to house dragging two metal ingots and everybody was amazed to see pots, pans, tongs, and braziers tumble down from their places and beams creak from the desperation of nails and screws trying to emerge, and even objects that had been lost for a long time appeared from where they had been searched for most and went dragging along in turbulent confusion behind Melquíades’ magical irons. “Things have a life of their own,” the gypsy proclaimed with a harsh accent. “It’s simply a matter of waking up their souls.” José Arcadio Buendía, whose unbridled imagination always went beyond the genius of nature and even beyond miracles and magic, thought that it would be possible to make use of that useless invention to extract gold from the bowels of the earth. Melquíades, who was an honest man, warned him: “It won’t work for that.” But José Arcadio Buendía at that time did not believe in the honesty of gypsies, so he traded his mule and a pair of goats for the two magnetized ingots. Úrsula Iguarán, his wife, who relied on those animals to increase their poor domestic holdings, was unable to dissuade him. “Very soon we’ll have gold enough and more to pave the floors of the house,” her husband replied. For several months he worked hard to demonstrate the truth of his idea. he explored every inch of the region, even the riverbed, dragging the two iron ingots along and reciting Melquiades’ incantation aloud. The only thing he succeeded in doing was to unearth a suit of fifteenth-century armor which had all of its pieces soldered together with rust and inside of which there was the hollow resonance of an enormous stone-filled gourd. When José Arcadio Buendía and the four men of his expedition managed to take the armor apart, they found inside a calcified skeleton with a cooper locket containing a women’s hair around its neck.

From the doorway of La Crónica Santiago looks at the Avenida Tacna without love: cars, uneven and faded buildings, the gaudy skeletons of posters floating in the mist, the gray midday. At what precise moment had Peru fucked itself up? The newsboys weave in and out among the vehicles halted by the red light on Wilson, hawking the afternoon papers, and he starts to walk slowly toward Colmena. His hands in his pockets, head down, he goes along escorted by people who are also going in the direction of the Plaza San Martín. He was like Peru, Zavalita was, he’s fucked himself up somewhere along the line. He thinks: when? Across from the Hotel Crillón a dog comes over to lick his feet: don’t get your rabies on me, get away. Peru all fucked up, Carlitos all fucked up, everybody all fucked up. He thinks: there’s no solution. He sees a long line at the taxi stop for Miraflores, he crosses the square, and there’s Norwin, hello, at a table in the Zela Bar, have a seat, Zavalita, fondling a chilcano and having his shoes shined, he invites him to have a drink. He doesn’t look drunk yet and Santiago sits down, tells the bootblack to shine his shoes too. Yes, sir, boss, right away, boss, they’ll look like a mirror, boss.

If you turn around now, a cautious turn, a cautious look, you’ll see her sitting and waiting, calmness or the shadow of calmness passing through her. She’s got a dreamer’s face, a wake me up and touch me face, her legs crossed in a cross. You’ll see her sitting and waiting on a sofa: her arms open, bracelets on her arms, a small watch on one wrist, rings on her fingers, over her left heel an anklet with a trinket on it, on each leg a knee, on each foot a striking big shoe. A restless body, she has a body of oh cut it out, can you see?, a body that she sits down, lays out, and plops onto a sofa upholstered with a woolen material that’s useful for overcoming polar chills but most unreal for any use in these triste tropiques: the sun carries out an ungodly vendetta here, it stains the skin, prostitutes the blood, roils the senses: here is Puerto Rico, the successive colony of two empires and an island in the Archipelago of the Antilles. Sweaty too, you’ll see her waiting sweaty, sweaty and plopped onto a sweaty ploppy sofa, a sweaty ploppy sofa that changes into a bed that changes into a sofa, an elegant member of a transvestite domestic cast that can do everything. The way her can can. If you turn around now, a cautious turn, a cautious look, you’ll see her waiting, sweaty, in spite of the shower of a little while ago. Did they hear her showering? Impossible: she was guarachaing. Under the shower, guaracha and woman in a mating of superb agitation: voice unleashed, body bumping bathroom walls, the shower curtain’s guaracha whiplash whacks, soaked in trills, faithful to all balling. Body and soul: springboards for a spree.