Galileo Was a Moron 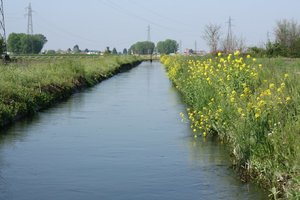 This piece was submitted by Michael Moore as part of the 2014 PEN World Voices Online Anthology.

We’re counting. The water in the irrigation ditch is flat and dark and looks like a blurry photograph of mud. It’s a July afternoon in 2005, and we’re looking at the water and counting.
By we I mean Stefano, Silvia, and me, Fiorenzo: a dumbass name, I know. We have to count to ten. Easy. I like counting. It makes things feel easy, safe. Mathematical, you could say, and you feel safe because math is perfect and you never go wrong if you trust it, as Galileo himself used to say.
Except Galileo was a moron.
You heard me, Galileo Galilei, who was from Pisa so all the schools around here are named after him and last month all my classmates at middle school did Galileo for their science projects and I did nuclear energy instead, not because I like nuclear energy but because the last thing I wanted to do was suck up to a guy who made up all kinds of shit and then wrote one day that the earth rotated around the sun and the pope wanted to burn him at the stake and so he said, Sorry, my bad, I was just kidding.
But that’s not why he was a moron. Galileo was a moron because he said nature’s an open book, and the book’s written in the language of math. So in his opinion everything in the world and in life—all the people and trees and shells and starfish and seahorses and traffic lights and jellyfish—can be broken down into numbers and geometric figures. What a pile of bullshit. If I said it everyone would tell me to shut the fuck up and they’d be right. Except Galileo said it so it must be true, since he was a genius and lived in a time when everyone was a genius or an artist and didn’t waste time at the grocery store, the post office, or the corner bar . . . they were busy dreaming up poems or paintings or, in this case, important scientific laws.
Bullshit. In Galileo’s day they didn’t have bicycles. They didn’t have electricity, and when they had to go to the bathroom they’d use this nasty bucket and then dump it out the window into the street without looking to see if anyone was passing by. They didn’t even know how to make ice—can you believe it!—and there used to be people who came down from the mountains selling snow, and people used to buy it.
And here we are acting like once upon a time everything was fantastic and deep and nowadays we’re just a bunch of morons . . . and it’s true, we are morons, except the way I see it we always have been morons, from the caveman days up to this very afternoon, when Stefano and Silvia and me are standing here by the ditch counting.
And if we want to compete to see who’s the biggest moron of all, then I’m about to become the world champion.

Three . . . four . . .
According to the Book of Nature, we can count to ten. I take it back: we have to count to ten. Otherwise the firecracker hits the water too soon and fizzles without going off. We’ve tried it a hundred times. The bottom of the ditch is covered with duds, but you can’t see them because the water’s so murky.
But if you light it, wait ten seconds, and then throw it, the flame’s so close to the powder there’s nothing the water can do about it. The firecracker lands in the ditch, starts to sink, and pow, off it goes, and up come bubbles and muck and any creatures with the guts to live down there. Fish, eels, frogs. Their lives come to an end and they all float to the surface, belly up, at the same time. Looking down at them from the banks, all you can see are the white stripes of their bellies breaking the water, swollen and dead.
But the stripe we saw this morning was totally different. It was big and black and bursting with life, a noisy back fin that slithered around like it had all the time in the world, splitting the water in two. It’s official: no question about it, there’s a monster in the irrigation ditch. So far the only one to see it is Stefano, but you can’t always trust him. He’s one of those kids who’ll wake up his mom in the middle of the night when he has to pee since he’s afraid to go to the bathroom alone.
But this morning all three of us saw it. You couldn’t miss it: it was huge. We were sitting on the dried mud on the banks, fishing, when holy shit out jumped this big black thing.
Stefano screamed that it was a shark, Silvia that it was a dolphin, but they were both wrong. Come on, it’s freshwater! Sure, in the Amazon jungle there might be blind dolphins that live in the river. But we’re not in the Amazon here, we’re near Pisa, and this isn’t even a river, it’s a small irrigation ditch that smells like fertilizer. So if the monster isn’t a dolphin and isn’t a shark, then what the hell is it? There was only one way to find out, and this time it would take more than a firecracker. No, we needed something heavy-duty.
M-80s. Six of them: professional quality, magnum size. Tied together with duct tape. Stefano said, “Isn’t that too much?” in that whiny voice that immediately pisses people off. Me and Silvia didn’t even answer. We gave him a dirty look and wrapped the tape real tight around the bottom, too, so it looked like one fat stick of dynamite, like a hand grenade. One step short of calling in the army.

Five . . . six . . .
We argued for half an hour over who got to throw it. Stefano shook his head and started kicking at the dirt. “It’s not fair! You’re always pushing me around just because I’m little.” Then we realized that what he really wanted was not to throw it. So we explained the situation to him and he quit whining. He walked away, looking upset, to a spot where he could still watch what was going on.
Choosing between me and Silvia was a lot harder. Sure, I was the one who came up with the idea of the mega-bomb, but she was the one who paid for it, so we were even. When push came to shove, there was only one way to decide: a game of one-two-three shoot.
Shoot!
I was odds, she was evens. I won.
It was a pretty cool moment, the last time in my life I won a game of one-two-three shoot, at least with this hand, my right. The same hand that can barely wrap itself around this big fat bomb right now. My palm feels powerful, pulsing with fire and gunpowder. I’m the king of the ditch!
Okay, Mr. Monster, you think you’re so tough? Well, take this!
My arm is pulled back and my T-shirt sleeve is all bunched up. I hear the sizzle of six little flames burning as one. It sounds like a breeze but it’s powerful, like a serpent’s nest or a bomber jet or the geysers around Larderello. It’s mind-blowingly powerful.
All three of us count together, getting louder and louder, and the numbers march by in clear and precise order and we are totally into it, resolute, sure of ourselves, and awesome . . .
Seven . . . eight . . . BOOM!
There’s a ringing in my ears. I see Stefano running away and screaming. I can’t hear him but I can tell he’s crying. What’s he got to cry about? Silvia’s standing in front of me like a statue. But she’s not looking me in the face. She’s looking down.
I look down, too, and I see what she’s seeing. I see an empty space.
Well, it’s 2010 today and a few years have gone by, but that empty space has stayed inside me. This is how the rest of the story went, more or less. Maybe it wasn’t duct tape. Maybe the monster was just a tree trunk rolling around because of the heat or the polluted water. But that feeling of emptiness got stuck in my head and is still there, just the way it was that day.
Because real emptiness is totally fucked. It’s not nothingness. On the contrary.
Let me give you a couple of scenarios, just to explain.
One: You go into a hotel room and open a drawer to put away your stuff. The drawer is empty and you start to put in your underwear, T-shirts, and socks.
Two: You go back home; in your bottom drawer you keep all your money, hidden in a shoebox. You bend down, open it, and the drawer is empty.
So, you’ve got two drawers and they’re both empty. But is it the same thing?
No fucking way.
Because real emptiness isn’t finding nothing. It’s finding nothing where there’s supposed to be something. Something important that’s always been there, and then one day you look and you realize it’s gone.
Like that afternoon in July 2005, when my ears were ringing and I looked down at my arm that starts at the shoulder and bends at the elbow and continues all the way to the wrist. And after the wrist, nothing. A hand was supposed to be there. My hand. It’s always been there. It’s been there for fourteen years and now there’s only air, the putrid air of the ditch.
That’s what I mean by emptiness.
One two three four five six seven eight . . . Boom!
Because Galileo was a big moron.
And I’m an even bigger one.

This piece is excerpted from the novel Live Bait, by Fabio Genovesi. Michael Moore’s translation of the collection is forthcoming from Other Press, 2014.