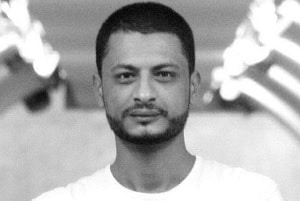 Galal El-Behairy is an Egyptian poet and songwriter. In March 2018, he was arrested and sentenced to three years in prison for his criticism of the government expressed in his lyrics for the song “Balaha,” which criticized the state of the Egyptian economy and government corruption, and for his unreleased book of poetry The Finest Women on Earth, which El-Behairy has described as “a testament to the value of women and their good deeds in the world.”

El-Behairy has long used his writing to advocate for political change, both through his songwriting partnership with exiled Egyptian singer and activist Ramy Essam and in his own poetry. The first sign of trouble for El-Behairy came on February 28, 2018, when Egypt’s Minister of Culture publicly denounced him on television and specifically referenced the as-yet-unpublished The Finest Women on Earth. On March 3, El-Behairy was arrested and disappeared for a week. When he reappeared at his hearing before Egypt’s Military Court, he exhibited signs of torture.  On July 28, he was sentenced to three years imprisonment and a fine of 10,000 LE on charges of insulting the military and spreading false news.

Today, Galal El-Behairy remains imprisoned. In addition to the torture that is believed to have taken place during his pretrial detention, El-Behairy undertook a hunger strike for two and a half weeks in 2019 in commemoration of the Egyptian Revolution, and in protest of the injustices that persist in his country. He is scheduled to be released on March 3, 2021, although many Egyptian political prisoners have continued to be subject to harassment and arbitrary detention even after their release from prison.