from The Pirate Who Does Not Know the Value of Pi 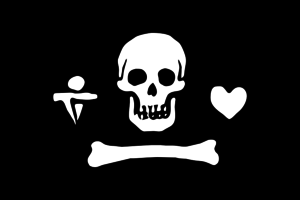 This week in the PEN Poetry Series, guest editor Cathy Park Hong features an excerpt from new work by Eugene Ostashevsky. About the excerpt, Ostashevsky writes: “These poems are from my new manuscript, The Pirate Who Does Not Know the Value of Pi, a poem-novel about the relationship between a pirate and a parrot who, after capturing prizes all over the seven seas, suffer shipwreck on a deserted island, where they discuss whether they would have been able to make themselves understood by people indigenous to the island, had there been any. Characterized by multilingual punning, humor puerile and set-theoretical, philosophical irony and narratological handicaps, The Pirate Who Does Not Know the Value of Pi steals from early modern texts about pirates and parrots, Russian 1960s folklore, old-school hip-hop, game theory, controversies of copyright, and Wittgenstein’s Philosophical Investigations, abbreviated as PI. Of the poems selected here, Pirate Party Music comes from a section of pirate songs that also include a shanty and a Russian folk piece to the tune of Bei Mir Bistu Shein. The piece formerly known as Pontius Pirate appears autobiographical. The piece about communicating with hypothetical indigenous people repurposes a line by William Carlos Williams. For the pun piece it helps to know that, prior to the invention of biscuits, parrots enjoyed almonds, as John Skelton attests, and that ‘almond’ in German is Mandel.”

πth pirate: How many pirates does it take to calculate the value of pi?
φth pirate: I dunno… How about a party?
eth pirate: Yo, gunner, whatcha got that’s smoking?
πeth pirate: Eyes on the prize! Party with the pi, parrot-pluckahz!

Who’s that Chewbacca doing handstands on the capstan?
Who’s hopping on a pegleg, saying “You know I don’t abstain!”
Who’s drumming up the rum butt—why, it’s the Uncaptain!—
The poop deck’s like a letter—it’s got the stamp on!

Never mind The Groundwork
For the Metaphysics of Morals—
Shimmy with your scimitar and uncorral some quarrels
You’re all so handsome, you’ll get a big ransom
If it’s all hands on deck they’ll raise an insane storm
Scratch blunder off your blunderbuss—it’s no blunder to plunder
The wheels on this ‘buss are going rounder and rounder
Wave your ‘buss in the air, it will get you anywhere
The passengers are panicking to pay their fare
Like Ralph Kramden and Ed Norton
You might come from Camden but you’ll get into the Norton

Somali pirates of the Caribbean got nothing on me
Even when I’m peeing I am being ornery
I calculate the value of piasters like Mitt Romney
I climb the frigate rigging, bringing the triggers on me
Bullets are like boarding in that they don’t bore me
I dispel boredom at board meetings, saying, Hello bored members,
Care to walk the plank? I want to say thank
You to you for your support of my dis-
Porting ashore with your offshore hoarding, for bank-
Rolling the rolling I do after porting, for ad-
Ding the ding I have to the fun I have cavorting
Your boarding school had you reporting on importing and exporting
But my boarding school was no-frills, its one major was boarding
And I got magna cum laude, in a crowd of rowdies I’m the rowdiest
I appear and disappear so fast they call me the Quantum Pirate
Yo it’s the Max Planck I walk cause you know I’m so maximum
I eat off crystal plates placed next to a chrysanthemum
I’m full of stratagem, parrots think I’m a total gem
And cockatoos skipping double-Dutch without slipping
Coo I’m Most Likely to Disrupt International Shipping

A certain Pirate had Concern for his Health and so he emigrated to Germany. It was there he learned the best Technique of effective Handwashing. Germans wash their Hands in the following Manner, which is the best. First they take one Hand, which can be the left or the right. (Here the Handler performs a Discriminationsavoidingeffort.) Then they take another Hand. Then using the second Hand they wash the first Hand. And only then do they use the first Hand to wash the second Hand. It is never the other Way around. That’s the Technique. That’s how they do it in Germany. As the Result of this Technique there are very few Germs left in Germany.

PIRATE:   Do you think this island has any indigenous people on it?

PARROT: If it does, we won’t understand them or they us. Indigenous people never have any common sense.

PARROT: I don’t have to meet all of them. That’s what logic is for. If they had common sense, they
would emigrate. If they emigrated, they would no longer be indigenous people. Q.E.D.

PIRATE:   But, parrot, why should they emigrate?

PARROT: But, pirate, why shouldn’t they emigrate? Should they sit here all of their lives? Don’t they deserve a
second chance?

PIRATE:   Why do you take it upon yourself to speak for indigenous people?

PARROT: If I don’t speak for them, who will? Somebody has to speak for them if they don’t have any
common sense! Most of what they know is numb terror under some hedge of chokecherry or
viburnum, which they cannot express!

PARROT: Poor genuine people my pope’s nose! What if they show up and ask to see our visas?

PIRATE:   But we don’t have any… We don’t even possess passports!

PARROT: This is what troubles me, pirate. Suppose we get deported?

PIRATE:   We must persuade the indignant people that in our culture it is not proper to ask pirates and
parrots for passports!

PARROT: How can you persuade anyone of anything if they don’t have any common sense?

PARROT: Let me read you something. “Unlike their peers, the Tonga Islanders do possess native numerals up
to 100,000. Not content even with this, the French poet Leconte de Lisle pressed them further and
obtained numerals up to 1012; however, his data was proven upon publication to be partly
nonsense-words and partly indelicate expressions, so that the supposed series of high numerals
forms at once a modest lexicon of Tongan indecency, and a warning as to the probable results of
taking down unverified answers from savages.”

PIRATE:   I can see why you’re nervous. Ingenious people are really hard to talk to!

In the beginning was the pun, and the pun was with the parrot, but the parrot was with the pirate, who was apart of the main. Who was a part of the main. What are you talking about, who was on first. Homer. He went rounding western isles, where many a tailor holds Errato by her diameter. Then who was on pi. Many that were on pi departed for the successor of pi but encountered failure. Why. They got lost in translation. So parried the parrot. He was not that pun but he was sent to pontificate by the pun. His own would not know him. They said he was ostentatious. He would witness three bears to the pun. The mama bear said, “Don’t play with your words or you’ll have to eat them.” The papa bear said, “I feel like we already went through this with parsley.” But the little bear didn’t say anything, he just laughed and laughed because there was an immigration gap between him and his parents. What about the pirate. What about the pirate. Who liked to rhyme and pun so much he disconnected the cishment. How. By axing. With what. With a partisan (for he was particular to that pole-arm). No longer was he a subject for punishment. Yes he found impunity. It was a puny impunity but still. One could not impugn his tale. They could not say. The pirate is the child of the man. The child of the man tells a tale. The tale entails counting. Counting relies on natural numbers. Natural numbers do not include pi nor can they represent its value. The pirate does not know the value of pi. Does a nomad not know a monad. Who leaped from the diameter to the perimeter. Who went rounding western isles, and non-western also. While singing. O amant des amandes, O Geliebter des Mundes, O Geliebte des Mondes, O aimant de l’aumône! For the pun is an almond. If an almond falls on the floor, nothing happens, but if you ingest it, you turn. What do you turn. A participant. Of what part. The part equinumerous with the tale. An almond for the parrot, cried the pirate. For the parrot was of the almond stock. My family I impart you this tale, ein Teil für das Ganzen. The conjunction und rotated one hundred and eighty degrees.