from On Walking On 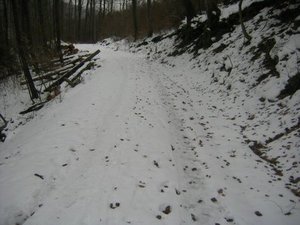 This week in the PEN Poetry Series, guest editor Robert Fernandez features an excerpt from On Walking On by Cole Swensen. About Swensen’s work, Fernandez writes: “Cole Swensen’s sequence ‘Robert Walser: The Walk’ takes Walser’s novel, The Walk, and the person himself, Swiss born writer Robert Walser (b. 1878-1956), as its staging point. Of Robert Walser, W.G. Sebald said ,’Nowhere was he able to settle, never did he acquire the least thing by way of possessions….he was the most unattached of all solitary poets.’ Indeed, Swensen remarks that, for Walser, to begin a walk was to start out ‘Among a room of ghosts. / To the quiet end, if one could walk a lost.’ A walk, here, is both a fanning out and a dissolving along thresholds: ‘…to walk was to unfold / an origami bird as a door unfolds a world….the sun spun, / and off he walked on that.’ In Swensen’s sequence, her exquisitely rendered images, unexpected syntax, and surprising line breaks give us the feeling of something ‘delicate,’ an ‘arrangement,’ falling ‘to pieces’ while at the same time, in its falling, ‘perfecting the scene.’ One can’t help but think that a walk is the work and that Swensen’s ‘Robert Walser: The Walk’ is a meditation and poetics enacted, the poem as ‘a studied inability to find [its] way home.’

For Walser, a walk usually began by putting on a hat.  Among a room of ghosts.
To the quiet end, if one could walk a lost. For Walser, to walk was to unfold

an origami bird as a door unfolds a world. If there was a child there, the sun spun,
and off he walked on that.

He knew that a planet, too, wanders, open, in a field of asters. And watched
the terror vanish, falling with the trees into darkness. You walk the dark to recall

a specific point in an argument in which you saw something delicate
fall apart. In fact, to pieces. Walser leaned down to pick something up from the

dusty road, and the dust, one by one, Walser thought the form of a road beautiful
in itself, citing that its joy exists outside of time, or rather beside it, so Walser

walked along the side of the road singing under his breath to the grass.

He thought a walk could be a masterpiece, which is a matter
of arrangement—the elements carefully chosen, a small hand,

another stand of trees, out of the corner of his eye, he saw
someone smiling. A walk brings things out, wraps them up

in glorious scents, holds them out at arms’ length and keeps
them there, just out of reach, perfecting the scene.

Past the gardens, he walked always watching, which sealed the seen
into the passing, as what grows in turning is something of the sun.

He was on his way to Frau Aebi’s, somewhat detained by the sound
of leaves, something left in the shade of green, the deep grey

of sheltered light. He saw all things in light of their thoughts. It was
a day of flags and grain. Everything good is based therein, he said

A garden is itself a walk that goes beyond itself; is the act of distance lived,
composed of senses strayed. He walked across a field that bordered a river

that ran alongside the sea, harvesting a studied inability to find his way home.

For Walser, walking turned everything he saw into something charmed
a twist of light along a road or through a stand of trees, a person framed

lined with trees in which strings of lights have been strung to trace
a path back and then back again, walking always brought Walser to an edge

that appeared to live. For instance in the distance, a railroad running
perpendicular. Which is in the future, which is in its nature, and so will still be here.

What is striking in Walser’s Walk is his evident happiness, the volatile
occasion of every glance as every glance can capture every moving thing

simultaneously throughout the drifting trees, the forest of voices that are
not heard, the voice as a layering of immediate futures into which we are

equally, the trees that frame the door of the inn glide forward almost
imperceptibly or seem to, to lean into, and we hold onto the image, saying yes

we have seen this, and left nothing behind.

The myth of the wanderer is common to all cultures, the one who, never
quite placed, harbors. To be lost is a stranger. There was no other way

to arrange it: a man walking, not down the road but beside it, who
looks down, being taller than, and almost says, but not quite, and

touched instead, placed his hand just barely on the top of your head.

And then it turns to snow—you knew, but now can’t remember what
you said, what    now through the stolen dark.    And the sharp light

clattered back. What star? Or he was  blinded by the light coming
off the snow. And the snow came off on his hands. This wander had

its blindness timed. He walked into his past.