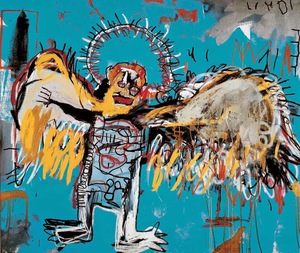 This week in the PEN Poetry Series, guest editor Cathy Park Hong features a poem by Roger Reeves, who includes the following author note: “The speaker of this poem is a lynched man. As his body decays, pigs, birds, wolves, and wind carry the body to different parts of the world, and through these flights and departures, he, the speaker, experiences and meditates upon the world from these different vantage points—Gaza in the summer of 2014, Boko Harum, the hanging of Emmett Till’s father. What isn’t carried away seeps into the earth and travels back in time as it mixes with the soil. The body constantly transforms and speaks to this transformation. Because he is at the edge of afterlife, he, often, contemplates the rules, boundaries, and limitations of paradise and death.

276 ravens fight at the top of a hairless pine for its tip,
To master the bottom of the sky. Their black tumbles
And tumbles into a type of second moon or sun,
A speculation of vision absented revealed then absented
In a circular whirring that knocks and knocks at a door
I open and open to find 276 girls missing in Nigeria.

I should just tell you what I see: 276 Nigerian girls
At my doorstep asking me to braid their hair
Though they know I cannot, and without wiping their feet
At the mat, they enter my yellow house, and I do not
Ask them to remove their dirt or their shoes or the vacancies
They whisper about: Your silence will not save you.

We have not asked for you to speak for us.
Our disappearing speaks for us… The pine tree’s fat needles
Brush the window to my right. The shadow of its flowers
Javelin down the sun and the ravens flaking off
Into dark scabs below the pine. Even in death,
I am only as useful as pond to moon—an unasked for reflection.

In Gaza, the bombs knock on the roof before they enter.
Allahu Akbar            Then they ax their way in
Like a wolf without manners
Or, rather, with the manners of hunger,
Which are impartial as spit or blood.

There is no medicine for imperial fatigue.
Just ask the buildings in Gaza
Or the mothers underneath them.
I’ll wait…
What did you learn of fatigue?
What house can hold that missing?
This is not a war with caskets.
The dead will not be queued into plots
For the kind dissection of maggots
Though the maggots will kindly find them and provide them
A final justice or maybe the first—mathematic, clean,
Impartial as spit, blood, bite pressure.
They, the dead, will stumble across our newsfeeds
And morning cups of coffee,
In the curved tongue of a teaspoon
Knocking against the skin and walls of the dishwasher.
The dead in the morning crow flying into our window
With a boy’s toe in his beak, no it’s a just twig.
Everything in and of war in war.
Every flight and branch and wing,
A body of war: a woman brushing a boy’s hair—
War—the wild turkey napping in the shade—
War—In what shall we trust? What will resist
Even this declaration of war? Certainly not the houses
Or the crow obliterated against the window.
Or the white cat carrying all manner of scrap
And wing to our porches and pillows,
And there again, the dead, with their one question
And there one official statement
About war: It is in our blood and bones.
It takes a genius to forget these things.

What should be read between the shelling,
When walking from one exile to another?
What do we do with Darwish’s horses
That have fallen over the edge of poems,
The cypress trees, the fog peeled
By an orange,
Thucydides and Homer burning into a gauzy thread
That circles the minarets and fingers of Gaza
Then disappears?
The marriages—of ass to field,
Of thorn to tongue—disappear
Into wells dug by bombs. The Galilean woman,
The fugitive missile, the jeeps passing between
The burning date trees
Reluctantly measure the space between limb and severed limb,
Place and no place.
The walls of the city have lost their arrogance.
Even they tremble.
Now, watch the sun wash its dry face in the ashes.
How have the children dead in the streets offended my brother?
Around their lips, black haloes.
What might these ringed mouths beg for—
A finger dipped in water for their tongues,
The gold flesh of a peach,
Paper, or the tree before the blade?
Would they ask to return?
Or would they plead leave us here alone in this new desolation,
Wherever it is? Read to us what the dry drinking glass remembers of water.

Perhaps you have wept
Because you have tried to open an umbrella of pines
As shelter over a child’s sleeping face,
But the noise of men,
Their cement mixers and calls to prayer—
Their petitions to protect the storehouses of paper money
From locust or age or the tiaras of lightening
Battering the spires and minarets of the city rinsed in the breath of the dead—
Yips like a legion of small dogs
In the ear and neck of that same child. Perhaps you have been
This sort of bomb, I mean, balm. Honey
Spilled onto the counter rather than into a cup of tea,
The ants scrambling over each other
To taste a mistake,
One that will eventually lead to them drowning
Or crushed
Beneath a rag and the pressure of a cleaning bone. Have you been
This sort of sated tongue, willing, speared, crushed?
Perhaps you have wept for the counter.
Perhaps you have been that weeping body
That climbs to the roof and presses
A wet face to the screen of the sky,
And yet the bombs pierce your umbrella
And the pines, and the small dogs carry your sleeping child
Out past of the walls of this city
Into a stand of burning date trees and eat.

As if exile could be amnestied with a plot of dry land,
Wrestled from the whip and bang
Of a bird whose twitter growls with the smell of expired milk,
Pecker-fretted apples that cause a mouth to itch.
What were you to do
But eat
What grew in exile?
Allergies require the privilege of a homeland.
SLAVES HAVE NO MORTAL BODIES.
If the cow’s body bleeds its white body,
Then drink
Even if you must vomit up the house
And field and boat
And lash and thorn and mule and ditch of dead water.
Are we allowed to be here?
What will our Lord brandish or burn upon our heads
For wandering this far away
From our black work
Of making the silver shine? Never
Call my exile traveling. Maybe
Translation, cow and maggot yoked together on this paper joist
And how they both churn milk,
Cultivate decay, tunnel through and through
Until their bodies, a kind of imagination,
Lit and light in another.
What mountain have I mistaken for an ox
Trampling a farmer’s son beneath his plough? Look,
There in the sky, the ox shot by an angry father
Or, a crab. Excuse me,
I’ve just learned how to read the heavens
Which means I am a man
Who takes his erection into a sea
As if driving a tent spike through his own fool head.