from In the Gun Cabinet 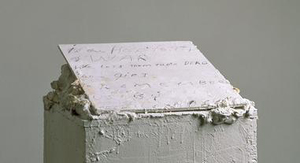 This week in the PEN Poetry Series, PEN America features a poem by Mike Lala.

from In the Gun Cabinet

so old, they disintegrate (fine red mist) & curl up
into the day

into the day, the gun cabinet

the radio on the table, the airstrike

in the museums, the galleries, archives of a century

drawers whose mediating walls are rotting, that single image repeated

(I remember, somewhere, saving the front page because I thought it was worth something)

in that same light

streaming through the dust, the light

playing off your lips as they mime the arc

of the brushstroke’s blunt end

We left them their dead as a gift

and in the ponds broken off from the sky…

loved me as myself

I entered the gun cabinet      I kept

forgetting who I was, what he wanted, which side

or surface I belonged to

in his despair, he drew the colors

not even the end of his magazine]

what work to be done then

when the birds falling right out of the sky

the sea mammals blind from the concussions

you place the glass down & begin your day, light

flecking off the surface, doubled & blinding

on the nose of the plane he flew

my mother smiled & my younger brother looked up from her shoulders

there is a picture     I remember

will my work speak from its place to this

am I so seduced I believe

the time I spend

and what I produce

are untethered to the economy I live by

hand that raised    I   reflected   the white flat

how you gaze beyond the gun cabinet

a birth water the better nation does it exist?

to an end, our winter

what parts of the story were you told dark evergreen

did you take to be your own

Our time here in the gun cabinet is limited

under the dark gaze of the oak

sun in your eyes   you were there

brother, sister I never knew (here, within my question, you

and yet you were

[This excerpt from “In the Gun Cabinet” uses language (in italics) from several Cy Twombly paintings and sculptures, including Epitaph (1992); Untitled, a Painting in 9 Parts (1988); Analysis of the Rose as Sentimental Despair (1995); and Say Goodbye Catullus, to the Shores of Asia Minor (1994). These pieces quote from Archilochus, Rilke, Rumi, Catullus, and George Seferis, and include writing from Twombly himself. All are on permanent display at the Cy Twombly Gallery, the Menil Collection, Houston.]