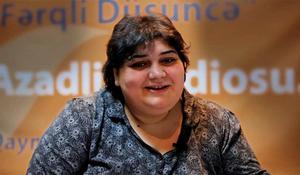 PEN American Center condemns the extension of Azeri investigative journalist Khadija Ismayilova’s imprisonment. On May 14, an Azeri court ruled to extend Ismayilova’s detention period through August 24. Ismayilova was arrested on December 5 of last year on the spurious charge of inciting a co-worker to commit suicide (her accuser has since asked that this charge be dismissed by the prosecutor). A slew of additional charges, including operating an illegal business and tax evasion, were added in February. As she started her sixth month of imprisonment, Khadija was honored with the PEN/Barbara Goldsmith Freedom to Write Award at the 2015 PEN Gala on May 5 for her audacious and dedicated journalism, which exposed corruption at the highest levels of government.

“The extension of Ismayilova’s detention is a brazen move by the Azerbaijani government to further attempt to silence and intimidate Khadija and other investigative journalists,” said Karin Deutsch Karlekar, Director of Free Expression Programs at PEN American Center. “With less than a month to go until the European Games open in Baku, the government’s fear of those who speak truth to power has never been more apparent. We urge President Aliyev to reconsider this approach and to end the crackdown on free expression and human rights in Azerbaijan.”