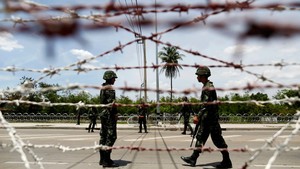 London, May 21, 2014—PEN International calls on the Thai army to allow journalists and other writers to continue their essential work documenting and commenting on the emerging situation as martial law is imposed in Thailand. Amidst rising political instability and escalating violence in the country, its 1914 martial law poses serious threats to freedom of expression.

“Military intervention is never the answer to failure of political leadership. For example, it is unacceptable that the army should order media to limit interviews to officials. A lack of public transparency will encourage, not discourage violence. This evolution of events is increasingly dangerous,” said John Ralston Saul, president of PEN International.

The Thai army imposed martial law on May 20, 2014, citing “political demonstrations and protests by various groups of people … and widespread armed attacks aimed at inciting violence against the public.” In the following hours the newly established Peace and Order Maintaining Command (POMC) issued a series of orders closing down 14 broadcast media outlets and all unauthorized community radio stations. Restrictions on reporting and on social media were imposed under Orders 3 and 9 to prevent the spreading of “false information” and to”‘maintain law and order.”

While there were no initial reports of censorship in the print media, the same orders give the military authority to ban the publication, distribution, or selling information that is considered “distorted” and that could lead to public misunderstanding.

“The restrictions imposed are very broad and limit the freedom of expression of people in Thailand at a time when informed and constructive dialogue and debate are all the more necessary to move towards a peaceful resolution of the current political unrest in Thailand,” said Carles Torner, executive director of PEN International.

In recent months, there have been escalating political protests and unrest in Thailand between pro-and anti-government activists after the Thai Senate rejected a controversial amnesty bill in November 2013, which would have nullified former Prime Minister Thaksin Shinawatra’s 2008 graft conviction and allowed his political return. The proposed bill sparked widespread unrest. Around two dozen protestors have been killed and scores injured. One such victim of Thailand’s escalating political violence is renowned poet Mainuen K. Kunthee, who was shot dead on April 23 by unknown assailants.

Tension has risen further in recent weeks after the removal from power of Prime Minister Yingluck Shinawatra and several ministers by the Constitutional Court over the controversial transfer of a senior security officer in 2011.

So far, the POMC has ordered radio and TV stations to abandon their normal programming and to transmit army information on request; restricted demonstrations by opposing sides to two designated areas (Order No.2); banned media or press materials that it deems inflammatory or distorted and capable of inciting conflict (Order No. 3); asked online and social media providers to censor messages that could spark conflict or are critical of the army’s operations, and threatened to suspend services that do not comply (Order No. 8). It has also ordered all media not to conduct interviews with individuals who do not hold official positions, on the grounds of preventing the spread of messages that can instigate violence or cause public confusion (Order No. 9).

Thailand is a state party to the International Covenant on Civil and Political Rights. Article 19 of the covenant guarantees the right “to seek, receive, and impart information and ideas of all kinds, regardless of frontiers, either orally, in writing or in print, in the form of art, or through any other media of his choice.” Although this right may in some circumstances be restricted on the grounds of public order, any restrictions must be demonstrated to be necessary, proportionate, precisely defined in law, and be open to challenge in court.

The 100-year-old Martial Law Act that has been invoked is a serious threat to human rights as military actions are not subject to any limitations or judicial oversight. The army can censor the media, ban meetings and gatherings, prohibit any activity, and detain people without charge for up to seven days. There is no right of redress for individuals for any harm or damage caused by the army in its implementation of martial law.

In a briefing to diplomats, the POMC stated that is had chosen to apply “only a few provisions” of martial law which it deemed necessary to maintain peace and order “so as to minimize restrictions on human rights and fundamental freedom of expressions.”