PEN America sat down with author and illustrator Mira Jacob to talk about what freedom of speech and expression mean to her as a writer and teacher, the value of curiosity, and how asking questions can provide a resiliency that answers don’t. 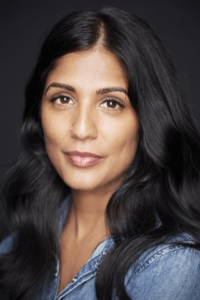 Photo by In Kim

Mira Jacob is the author and illustrator of Good Talk: A Memoir in Conversations, which was longlisted for the PEN/Open Book Award and is a National Book Critics Circle finalist. Good Talk is a graphic memoir about American identity, interracial families, and the realities that divide us.

She is also the author of the critically acclaimed novel, The Sleepwalker’s Guide to Dancing, which was a Barnes & Noble Discover New Writers pick, shortlisted for India’s Tata First Literature Award, and longlisted for the Brooklyn Literary Eagles Prize.

This interview was edited and condensed for clarity.

What does freedom of speech mean to you?
For me, it’s about knowing, as a writer, that I have a right to head toward an unpopular, quieter, or nuanced opinion that hasn’t found its foothold yet and parse it out, carefully and deliberately. When I think of freedom of speech, it’s from a very personal standpoint, first as an artist and a creator. It starts with the part of my brain that says, “You are allowed to think about anything, and further, you are allowed to parse it through with your writing.” If I didn’t have that, if I wasn’t raised with that idea, I think it would have made a very different artist out of me.

“When I think of freedom of speech, it’s from a very personal standpoint, first as an artist and a creator. It starts with the part of my brain that says, ‘You are allowed to think about anything, and further, you are allowed to parse it through with your writing.’”

In addition to writing, you teach at The New School. What does freedom of speech and expression mean for you as a teacher?
What’s really interesting to me about this moment is that it’s really hard to teach. It’s hard to teach because everybody’s back is up, especially if you’re teaching writing. People come in wounded because we’ve all watched our oppression in numerous ways. We’ve all been the bystanders in our own oppression, reading certain works over and over again in which bodies like ours are maligned and treated badly. One of the things that I think about a lot right now when I’m teaching is what it means to bring these pieces into the classroom, while also being open to talking about what does it feel like to read this. What is the historical context of these works, and how do we parse through them in a really thoughtful way, while also not doing it at the expense of the bodies in the room? How do we honor both things?

How has the conversation around “the literary canon” changed over the last few years?
One of the things that often comes up when we’re talking about fiction is this idea of who gets to imagine what, and what happens if your storyline is disappointing or hurtful to the readers that read it. That conversation is much louder now that it was before, but for me, that is actually a good sign. So much of the work that I do when I’m in that position as a teacher is to try to stay curious—curious about the work, curious about how students read it, curious about what it says to us. And again, if we’re talking about curiosity, I would say mine was distinctly informed by the notion of free speech—that you are allowed to think and probe and wonder aloud about these many things, and you are encouraged to do that. It doesn’t mean that it comes without repercussions—if you write something really painful for other people, you’re going to hear it. But just even allowing yourself that freedom is helpful unto itself.

What do you think is one of the biggest threats to the freedom to write?
One of the things I worry about constantly with writing is who can afford to do it. It’s very hard for writers to get paid, and so it’s very hard for people to make this an economic reality, which means that you hear less in print and online and everywhere else from people who probably need to be heard the most from.

“It doesn’t mean that it comes without repercussions—if you write something really painful for other people, you’re going to hear it. But just even allowing yourself that freedom is helpful unto itself.”

Your book, Good Talk, was described by Longreads as being “more concerned with thoughtfully exploring questions than in arriving at definitive answers.” What do you think is the value of approaching conversations from the starting point of asking questions?
I can answer this in the inverse. I think the thing that is rough at this moment is that we’re all grasping for answers. That’s what you do when you’re in trauma, and we’re in trauma, as a nation. We want things to make absolute sense; we want somebody to say this is how you stop the pain, and the pain stops here, and it stops in this way. But I find that the more I read those answers, the less I believe in them. I feel like they’re sort of a Band-Aid right now, and the problem is that we’re so skeptical of every Band-Aid that we just immediately rip it off to see what’s under again. But if you start by not trying to bandage up the thing, but look at it and clean it out—I feel like curiosity is exactly that. Curiosity is, for me, very much an illumination, a cleansing. For me, I feel a bodily shift when I am curious. I feel a bracing effect, to hear things that are repugnant to me, to hear things that would otherwise shut me down or hurt me deeply, if I can stay in a place where I keep asking questions. It provides me with a kind of resilience that answers don’t.

How have you dealt with public comments regarding the book since its release? Has it been easier or more challenging to deal with online feedback regarding the book?
What’s interesting about this book is so far the reception has been largely positive, and the negative feedback for it mainly comes at me when I’m touring. The real liability with writing this book hasn’t been what I thought it would be, which was attack; it’s been exposure to the enormous amount of pain that everybody is in. I wrote a book that I think showed people that I was in the same kind of pain that they were, which for me, when I’ve read books like that, has been enormously helpful. I thought that the hardest part of writing this book was going to be a certain kind of hatred that I’ve gotten before and that I’m used to, but in fact, the hardest part of writing it has just been how much it has resonated with people in understanding the realm and the depths of their pain.

Free Speech 2020 is PEN America’s year-long initiative to highlight threats to free speech and showcase how we intend to fight back—by defending press freedom, fighting online harassment, combating disinformation, and upholding protest rights. PEN America is highlighting our conversations with writers, artists, activists, journalists, and advocates who work at the intersections of creative expression and free speech throughout 2020. Learn more about our work here.