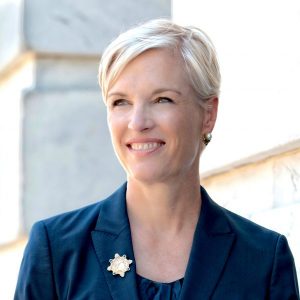 Cecile Richards is a national leader for women’s rights and social and economic justice, and a co-founder of Supermajority—an organization fighting for gender equity. She is also the author of New York Times bestseller, Make Trouble, and the former President of Planned Parenthood Federation of America and Planned Parenthood Action Fund.

For 12 years, Richards worked to increase affordable access to reproductive health care and to build a healthier and safer world for women and young people. After starting her career as a labor organizer, working with women earning minimum wage, she went on to start her own grassroots organizations, and later served as deputy chief of staff to House Democratic Leader Nancy Pelosi. In 2011 and 2012, she was named one of TIME’s 100 Most Influential People in the World. Richards is a frequent speaker and commentator on politics and progressive issues. She and her husband, Kirk Adams, have three children and live in New York City and Maine.

What does free speech mean to you?
One of the most formative experiences of my life was the day I got on the bus to Westlake Junior High (outside of Austin, Texas) wearing a black armband to protest the Vietnam War. I knew I would probably be the only person at school who wore one. Sure enough, when I got to school, the principal tracked me down and brought me to his office. He asked if my parents knew what I was doing, and he threatened to call my mom and inform on me. (It was his stroke of luck that Ann Richards wasn’t home!) I refused to take off my armband, and he had no choice but to send me back to class.

The standoff was thrilling. (I’d never even met the principal before that point, and there I was in his office!) I sometimes wish I could track down Principal Hestand and thank him for getting me started on a lifetime of making trouble. It was one of my first brushes with activism—and with the importance of free speech, which to me means the ability to challenge authority, question the status quo, and stand up for what you believe in.

“I believe the right to vote, and to know your vote will be counted, has always been one of the most important arenas for free speech and free expression.”

What do free speech and free expression mean in 2020 specifically?
These are tough times for free speech and free expression in America. We have a president who has threatened his political opponents, attacked reporters on Twitter and at events (shout-out to the brave journalists who continue to hold him accountable), and tried to clamp down on freedom of the press in order to hide the corruption of his own administration.

It would be easy to be discouraged by all that’s happening, but I’ve spent the last year traveling the country, and I can happily report that women are on fire. They’re organizing, marching, protesting, speaking out, and raising their hands to say “Me too” and “Time’s Up.” Supermajority, the organization I started last spring along with Ai-jen Poo, Alicia Garza, and other women working across the progressive movement, is focused on running a massive women-to-women voter turnout program. I believe the right to vote, and to know your vote will be counted, has always been one of the most important arenas for free speech and free expression, and that’s particularly true this year.

What do you see as the greatest threats to speaking out?
This year? Voter suppression.

“Without free speech, you can’t have a functioning democracy.”

What would happen to our democracy and equal rights movements around the country if free speech was no longer protected?
That’s a pretty simple answer: Without free speech, you can’t have a functioning democracy.

As for equal rights movements around the country, I meet women everyday who have so much to lose, but who continue to lead with bravery and resilience. Many are already pressing forward despite ongoing efforts to suppress free speech. Women are quickly becoming the most powerful political force in America, and we are not going back to the way things used to be. As my mother used to say, you can’t un-ring a bell.

Free Speech 2020 is PEN America’s year-long initiative to highlight threats to free speech and showcase how we intend to fight back—by defending press freedom, fighting online harassment, combating disinformation, and upholding protest rights. PEN America is highlighting our conversations with writers, artists, activists, journalists, and advocates who work at the intersections of creative expression and free speech throughout 2020. Learn more about our work here.

This op-ed from the @latimes suggests that independent bookstores should be considered essential businesses, like newspapers, media, and magazines, because books themselves are essential to the health of the nation. https://lat.ms/2Ri1pU5