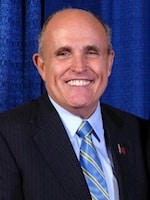 Position within the Trump Administration: Giuliani is being considered for Secretary of State and Homeland Security Secretary

The Free Expression Report Cards are just one initiative of PENt-Up: The PEN Transition Update, PEN America’s effort to track, analyze, and share important expression-related updates as our nation undergoes transformation into an America we all hope to still recognize. Read more at PEN.org/pent-up