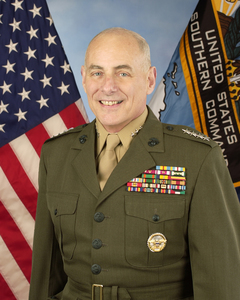 Position within the Trump Administration: Secretary of Homeland Security nominee

Within his role as commander of US Southern Command, Kelly has stood as a superior officer over all military activities in Guantanamo Bay Naval Base, which includes the Guantanamo Bay detention camp. In this context he has had the responsibility of making major decisions affecting media access to a tightly controlled military area and one of the most controversial spaces under US control.