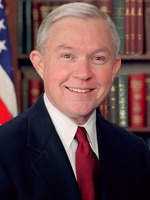 Position within the Trump Administration: Sessions has been nominated to serve as Attorney General, the head of the U.S. Department of Justice.
Previous positions: United States Senator, Alabama (1996-present); Attorney General, Alabama (1994-1996); U.S. Attorney, Southern District, Alabama (1981-1993).
PEN America has called upon the Senate Judiciary Committee to ensure that Senator Sessions will uphold constitutional guarantees of free speech and assembly during his nomination process. The Free Expression Report Cards are just one initiative of PENt-Up: The PEN Transition Update, PEN America’s effort to track, analyze, and share important expression-related updates as our nation undergoes transformation into an America we all hope to still recognize. Read more at PEN.org/pent-up.