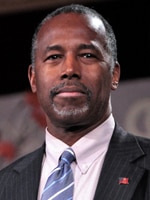 Position within the Trump Administration: Dr. Carson has been nominated by President-elect Trump to serve as Secretary of the Department of Housing and Urban Development
Previous Experience: Director of Pediatric Neurosurgery, John Hopkins Hospital (1984-2013)
The Department of Housing and Urban Development (HUD), a bureau which focuses on housing and neighborhood issues primarily for low-income families, does not include issues of free expression as an explicit aspect of its work. The Secretary of HUD will have far less of an impact on free expression and media freedom than other Cabinet members, such as Secretary of State or Attorney-General. But given how the HUD’s $47 billion USD annual budget includes expenditures such as grant-making for public arts programs and other cultural initiatives, and given how a Cabinet-level position will formalize Dr. Carson’s previous advisory relationship with President-elect Trump, a review of Carson’s public stances may be useful.
Government Agencies Monitoring for Political Bias
Anti-Trump Protests and Free Expression
Partisan Media
Political Correctness as a Threat to Free Speech
The Free Expression Report Cards are just one initiative of PENt-Up: The PEN Transition Update, PEN America’s effort to track, analyze, and share important expression-related updates as our nation undergoes transformation into an America we all hope to still recognize. Read more at PEN.org/pent-up
For PEN America’s review of the state of free speech on America’s college campuses, one area where Dr. Carson has directed his remarks on free expression, see our October 2016 report “And Campus for All: Diversity, Inclusion, and Free Speech at U.S. Universities.”