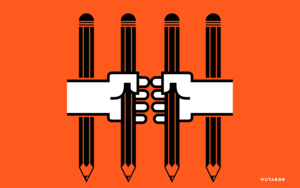 Hindu monastery worker is latest victim of Bangladesh religious killings *PEN CASE LIST
Unidentified attackers hacked 62-year-old Hindu monastery worker Nityaranjan Pande to death in Bangladesh on Friday, police said, the latest in a series of such attacks on religious minorities in the mainly Muslim country. Bangladesh is reeling from a wave of murders of secular and liberal activists and religious minorities that have left nearly 50 people dead in the last three years. THE GUARDIAN

Arrest of Homa Hoodfar in Iran shines light on dangers for dual citizens
A Canadian-Iranian professor researching women in the Muslim world has been arrested by Iranian intelligence officers, the latest in a series of detentions of Iranians holding dual citizenship. The professor, Homa Hoodfar, was initially detained on March 10 by the intelligence unit of the Islamic Revolutionary Guards Corps and was then released, but she was not allowed to leave Iran. THE NEW YORK TIMES

Fiji leader defends coup, refuses to reverse foreign journalist travel bans
Fiji prime minister Frank Bainimarama has defended the 2006 coup that first brought him to power, and says he will not reverse decade-old travel bans on some foreign journalists. The comments come as New Zealand prime minister John Key visits the country, the first visit from a New Zealand leader since the coup. AUSTRALIAN BROADCASTING CORPORATION

Zimbabwe: Zimbabwe National Army denies Dzamara claims
The Zimbabwe National Army has denied recent allegations by Patson Dzamara that the Military Intelligence is behind the disappearance of his brother Itai Dzamara, a journalist and opposition activist. In a statement, director of army public relations Lieutenant Colonel Alphios Makotore said the claims by Patson were false. ALL AFRICA

University of Chicago senior faces possible expulsion after campus sit-in
Today, fourth-year student government president Tyler Kissinger is attending a disciplinary hearing for helping orchestrate a campus sit-in. According to a campus summons email, he is being charged with “premeditated and dishonest behavior to gain entry to Levi Hall, creating an unsafe situation”. This comes a day before his commencement ceremony.
CHICAGO TRIBUNE