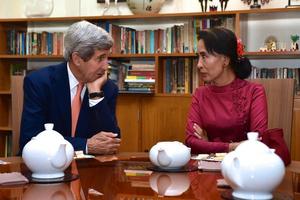 Although the multinational dispute over South China Sea territories dominated official discussion, in comments to reporters U.S. Secretary of State John Kerry drew attention to challenges facing democratization in Myanmar. “There is still obviously a lot of work yet to be done,” Kerry said. “We talked about the challenges of putting into law those things that people are allowed to do today but which might disappear in the future if they’re not put into law; we talked about constitutional reform.”

One of “those things,” of course, is freedom of expression. Recent crackdowns on media freedoms in Myanmar—including the conviction of five Unity Journal writers for their reporting on an alleged weapons facility and standing threats of imprisonment against another 50 reporters who rallied on their behalf—have provoked pressure from western governments and NGOs, including PEN.

Kerry also met with opposition leader, writer, and Nobel Peace Laureate Aung San Suu Kyi, who was detained on and off in Myanmar for over 20 years.

In Myanmar, as elsewhere in the region, the fraught negotiation between democratizing forces and the military will take years to smooth out. Thailand in particular demonstrates the dangers posed by military involvement in politics to hard-won free expression protections: the 22 May military coup has led to a stripping of rights and crackdown on the media. The willingness of U.S. and European powers to leverage military relations and surveillance technology sales to build pressure for human rights in South East Asia could well determine the future of free expression in the region.

The news isn’t all bad. Indonesia has re-emerged from decades of military-dominated post-independence rule with a sharply contested but largely peaceful electoral process in July. Extending free expression norms to the autonomous provinces of Aceh and Papua, where the UN noted significant rights violations in 2013, remains a challenge.

The Philippines, too, is emerging from a difficult period of conflict on the southern islands that has slowed the extension of free speech protections to marginalized groups. As with Myanmar and Indonesia, the challenge will be to match growing economic clout with human rights protections, especially freedom of the press to act as a watchdog on graft and other misconduct.

Rapid economic development in the ASEAN states is allowing far greater connection to the outside world for millions through the spread of internet connectivity and mobile phone technologies. These may ultimately serve as both tools for information sharing and new modes of surveillance and repression. No matter how the story unfolds, understanding of free expression in the region has been forever altered.