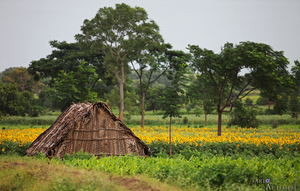 This week in the PEN Poetry Series, guest editor Robert Fernandez features four poems by Mark McMorris. About McMorris’s work, Fernandez writes: “These four stunning poems by Mark McMorris move between seemingly distinct territories, exploring the particular and the abstract, a ‘Practical Green Table’ and ‘A Place Made of Thought.’ They suggest that beginnings are unrecoverable, known only through artifacts and traces, and that a ‘real zero in orbit’ is at the center of existence, spurring and directing our searching and desires. One comes away from reading these poems with the imprint of the full, sensuous resonance of their music and the striking immediacy of their images: ‘the line between noise and music is inside you / like a moving shadow on the face of a clock.'”

Paradise must be a landscape inside

the language we inherit from the logos

borrowing from each person’s childhood

to repeat the sounds of owls at night

by sunlight on a valley’s hillside

where you stand, the color of earth

and there is a green table cloth spread

before your eyes for games of skill

an artifact of beginnings and a song

to stir the classes in a way not repeated.

What is it that is about the idea except

everyone agrees there must be such a place

the comfort of mass delusion or a wish

that it is ahead and not over, and not a fable

never mind their skill at the cithara

or their bondage in the land of the Egyptians.

Say then that the idea of it pre-dates

the Ziggurat of Ur, or the Olmec Heads

at Tres Zapotes. If only we had a metaphor

“ostrich plume ginger” as old as the idea

being the inventor of the design and a place.

A Place Made of Thought

Say then that the world is thinkable

and that the thought in which it appears

studies a picture of itself, and that there is space

partitioned by a geometric savant—

beginning of the primum mobile.

The mind stands upon the ground

tranquil in space, inside the folds

unraveled at the integral horizon.

Beyond the limits, the downfalling light

races to construe a there, a species

of landing, altogether tactile and unstable.

Say that the place is in the ether

and that a scribe dozes, bent over his scholia

in his dream-state copying the copy of the

original chalice, the orchid in heaven

how far does the mind project, how solemn

the hypothetical trace of Paradise

not metaphor and mordant simulacrum

but a real zero in orbit, chief of the ideas

entrusted to the scholar, in his wandering.

Another Poem on Nudes

What more is there to say about the future

of sea-scapes and lilac, the power of machines

and the omnipresence of noise in the plazas

where once we heard nothing, except the falling

of water in a cistern, the round stone basin

calmly present during the transit of Venus

What more is there to say about tambourines

that mimic the bells on a leather saddle, strapped

to a horse you rode across the Chinese tundra

or rode over a dune into the sand sea below

the line between noise and music is inside you

like a moving shadow on the face of a clock

What more is there to say about metrical forms

the duration of syllables, what is the optimal spacing

between wind and fiddle, or scythe and deliver

what hiatus halts the ictus, what vowel tunes

the tympanum when a pianist conjures elegies

to his mistress, the line between nude and naked

always was mysterious, until I saw the bare bones

reclining on a divan next to the coffee maker

Olympia with a black cat nearby, so frankly

sexual that the Venus of Urbino was offended.

I thought to write that elegy

as a reply to the questions

to pitch the word as far forward

over a threshold, to behold

the land as practical and green

as this table, a space to write

what does a reader suppose

if not the promise of a text

the ultimate form at the end

of a chain of forms infinite

summed to a singular value

the elegy as a place to begin.