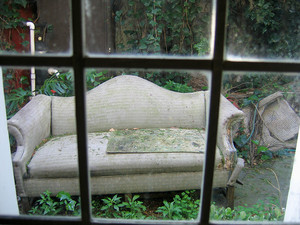 I am the windows
that look out on windows.

I am the gaze. I am the unreal

bodies behind the drapes.

Mine is the black counter
wiped down again and again.

I am a caretaker;
I worry from afar.

I worry a sore.

Where
do you go, after?

Between privacies is the dark
of a lock filled with key.

From inside my gem my look

is hidden, each face
familiar when facing away.

A Is for Effort

Day, you bring me the siren
held in your morning air.

I am grateful to be
inconsequential. Makers

of spell check, I was never
competent. It is the voice in

the error that speaks
loudest to me

about my character.
I am not even

here in this I. Aspirin,
with your extra eye

give me a piece.
A peace.

The day was dying on the couch.
The leaves of the birch were nearly

white now the sun was going down.
To discern imagination from memory

A devil was discovered in a cloud
after centuries. A dog lifted its paw.

I could never make proof
from the given.

I take my jacket
because I need its help.

I could feed you, you are my target.
I rest the channel. Now it’s your story.

Due to my recliner, I have a huge mouth
that precedes me in dream. There was

an entrance and now a complex of hallways,
late papers, a haunting by a class

I failed years ago. There was an entrance
and I entered—a fresh haircut, my mother’s

spit on my face where toothpaste had been.
There had been flies on your lips on the screen

but that was before and in a place outside.
I would risk your infection for an exit.

Locked out of leaving, the clock is steady.
There is a space on the table where initials

have not been carved. Between us
is a workbook filled with blanks.

The move came as part of cost-cutting measures under which the news service is also ending its radio programming in 10 other languages, including Persian, Chinese and Hindi.

#CRTForward Project Director @MerdithMade and @PENamerica's @jeremycyoung spoke to @DiverseIssues about how the #CRT debate is increasingly impacting higher education.
Read to learn more about shifting trends and targets in anti-CRT measures. 👇🏾
https://www.diverseeducation.com/from-the-magazine/article/15306014/the-critical-race-theory-debate