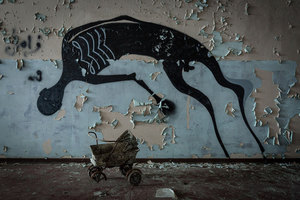 Too Early for Nails of Pulled Iron, We Have the Tongue.

who cares. the predictability of a universe expanding. here we must think
of boredom
and then speak of it
at the edge of the stretch.

FORMING GOD’S BOREDOM WITH HIS. THIS CONCEPT OF HIS.

and yet he speaks thus. thus he emerges from the end of a vessel as a drop
of mixed fluid,
for example,
saliva.

mechanically the idea of a clockmaker god is a model of simulation. to be
cursed of dirt,
with dirt
to handle.

apprehension of the enormous more & more difficult. a type of confusion
so that
babel
will be singularly stretched toward the fascia of
a man,

a thread between them. a name. locating yourself in a series of
renounceable
holes,
an individual attachment to not a mode of leaving but instead
being left behind,

I’M NOT AFRAID OF MAKING A POINT —

the arc of which resembles an apology for having been touched in that way,
in a hole somewhere the opposite of a tower.

Essay in Praise of Noah

The black hole swallows the wretched word. At the center we only see their ghosts. If anything the thing that gets hemmed in is the freedom of a given capacity. All of our capacities being realized, utilized. A male & its mate, a male & its mate. A male &. It swallows everything but the possessive. The nearest falsehood still unravelling. The thing of them is their presence.

& so I fall again. Uncomfortable in a hospital gown, fallow. The thing I’m praising is wretchedness. It gets easier, as easy as a slur. The tongue root and the doctor’s late, blinking the back of a machine. I know blinking means OK but even so. I’m surprised the water even rose, it seeming less and less human when everything has its own spot. Only ever read to me between moments of light terror. Only rising in the guise of hoarded goods. Rather the shape of the human itself, among other things, debt. There’s a hard ring in your breast. I’d like to say happy, but more & more. The most comfortable animal there, a cushy job to wait. Tasked & tasked with the business of shielding.

To Lead into Hell

An ape thinking this isn’t enough to have hands wrapped around another body, an extension of the room. The ape flesh so simply lost. The flesh of the cavern, the cheapest one around. The flesh being our mother, the public warp of hair. If there’s a local language, then it loses its curl, its privilege to sidle up next to the wall — to be saved — and to be saved from what. A bad combination of sounds, servile and profane. Despairing — it keeps moving — shattered body — imperceptible to other bodies. The flesh — instant to sediment — little by little. Whimpering — Little words — The mother to be as silent as rock. Suspended — the hands grasping — fugitive — tightly — the boundary crossed — light revolved — dark vision doubtless a backward problem — overflowing — faint sensation — the ape pressing — on the word — letting go — unity — the dust rising.

A HUG AFTER VOMITING; a prolapse of caring; the self-born act of speaking. Freud says. And then he doesn’t. Outside, a path to a pitch over the pitch a kind of mothering. The heat of it, to have an accident of both. Ripping the heat apart into the parts abandoned. If that’s a naming, it’s not the opposite. Doubting love gets too close to it. Gone the days of the colorful crag, the days-of-me. Gone-you goes to the other side of sight, the fairness of any given it so external to it, so forgotten the sound of that particular prolapse, too easy to misspell egress. It, being the opposite, becomes it & the fear of it. The tears-if-not now then later. Way too serious of a thing, the rent fabric, a Jewish shorthand rendered for waste of it.

"We knew (in 1989) as we know now that many calling for Rushdie’s murder were the same fundamentalist leaders who contributed to women’s oppression within communities. We spoke out in the name of our secular traditions, with the banner 'Our tradition, struggle not submission.'"