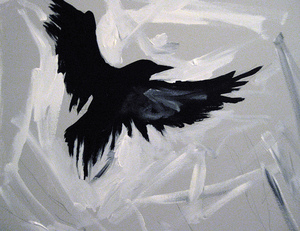 The following post appeared originally on the Dissident Blog, a project of Swedish PEN that aims to present the forbidden texts—works that can neither be written nor published in the writers’ own countries. In this short play, the Turkish artist and poet Yeşim Ağaoğlu uses humor to show what is unrolling in her native country. Ağaoğlu belongs to the new generation of leading artists and poets in Turkey who see an increased sidestepping of free expression and are speaking out about it.

Characters:
The Mother (around 60-years-old)
The Son (mid-30s)
The Crow (mid-70s)
The Minister
The Anchorman