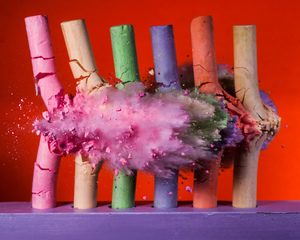 This week in the PEN Poetry Series, guest editor Cathy Park Hong features five new poems by LaTasha N. Nevada Diggs. About Diggs’s work, Hong writes: “LaTasha N. Nevada Diggs’s poetry is a tense coil of enraptured, disco-cursive, code-switching lines. New York City has been poetry’s mythologized epicenter from Whitman to O’Hara but where is the verse that celebrates the city’s broke, scrappy, underground past of hip hop’s genesis, club culture, and graffiti? Answer: Diggs. This ear-popping series of prose poems recovers the daily 90’s revels of New York City’s underground nightlife, from Rahzel, the Godfather of Noise’s “whole hip hop crew rolled into one man performance” virtuoso beatboxing to Matt Doo’s infamous album cover graffiti. Diggs too is a whole crew rolled into a one-woman performance; these poems are a scintillating collision of imploding allusions and vital, percussive wordplay. Her music is awesomely infectious and will rattle in your head for hours on end.”

Tunnel. a long musty boycott. a suspicious terminal. comp before 10. the security’s
a Vin & the dyke who could have. but u ain’t fly. u don’t attract notice. sewn plastic roses
to cheap men’s shoes off Columbus. dannon yogurt cups. girl scout patches to Lexington
bras. football safety guards & elastic. u gonna toil to get that comp. where club kids suck air
for a mile is a night on the disco truck. inside u work to contract that free drink before 12.
rhythm: sica. World’s upper dance floor is where bodies’ choreography is in the blood. they
raqs sharqi. they sabar & mambo. do u join them or head to red ropes for the Banshees &
New Order? a lonesome twinge to alternate between right & left feet. how many costumes
can u hide in? u really want to be next door. in It u can hide the insecurity of black.

“how do you say triceratops” Fred Moten

props flex snare simulate lip dear ventriloquist, guttural. how
you craft scratch between teeth. you padrino, the konnkol[1] do
drone. crash synth. optimus. rated M for mature. lung distortion. you
bass in gut. name the gallon of spring you. the invisible MPC. say
yours is precious. the heavy breath & reverb stomp of a triceratops.

Love Committee, Just as long as I’ve got you

what the spine say. why the spine talk. & how does Ejoe maintain his loop? is it from
the tap dance? Public Enemy blasting over his mother’s cross holler when he materializes
the next day? high strings ride the cords of his every partner. echo & shiver. does he get it all
out fucking on the bathroom floor in Schomburg Plaza? or when he rests on carpeted
staircase beside the audiophile’s system. eso. he his great nana’s child. types at shelter do
yuba. he the one that can outdo your signature gay or straight. your alpha is gospel. is the
quiver. is low bass. instigate upon every rhodes. winning every trumpet. yes he can dip. he
was only 6 when the song came out. in sections he happy manipulator. there the DNA
hemorrhage from his broken down sneakers. there, carnage every time his momma raises
the belt. architect of spins comes from defensive maneuvers.

“new graffiti sewn up in clothes for secret on storefronts.” Fred Moten

blunt radioactive fists of Pharoahe. yr eye can see molecules as cosmic. draw me a new
depiction of kinfolk. surreal is life bro. u swap head bops w/ paint brushes. graffiti
our block extraterrestrial. how u’ve always seen it. brownstones drunk on larva sewn
in collision w/ yr blues. can I call u cape crusader of oil & pencil & ink? raise up
preschoolers. they don’t know. u made Prince Poetry Thor. bear the brunt teeth in

human form. electrical shunt might have but the personal gets too much. yr clothes,
yr crayons. unleash the baby in the trunk. free the man. end. fold to the stress. for
a bullet is painless. ill comics before books got graphic or afro-futuristic. blind secret
misery. u don’t deserve the exorcism. wish u stayed. contort the blues bro. on
earth imagine love. dream yr collages masterly on exhibit beyond storefronts.

Nightcrawlers, Push The Feeling On (The Dub of Doom)

here we are again. shift change. a die above the Jerseyites. yr disco birdcage. u really can’t
stand them. yr besty got a tickle for Italians. Alvaro crowns her little Naomi. eso.  where u
study to close yr eyes.  this is how u oscillate yr locks. this is called freakin’ the two-step. the
red gold & green braided belt is a hula hoop. this is where yr neck & head communicate &
prepare for head banging. not all hardcore muthafuckas are equal. not all punks can be
shared with what u have here. a dutty before a dutty. Princess flicks his weave. a holandes
before u bomba. ‘faggots’ are the original head bangers. they made u the woman u are.