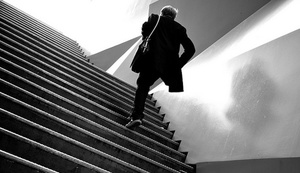 Mathan hadn’t told anyone that he was the Golden Deer. Who would he have told? The college friends he’d moved to New York with, whose own footholds in the city had been scaled so deftly over the last three years that they’d all but disappeared into a sweet, lofty haze over his head? (No.) Marley, the redhead in the apartment across the hall, whose weak smile and rabbit eyes made his heart bang around his ribcage like it was looking for a way out? (Never.) His brother? (And give him another reason to brag-by-comparison about his recent tenure? Fuck no. “My Monday lecture series really has me tied up,” Sanjay liked to sigh, like he was being held hostage on the Upper West Side by some brainy dominatrix.)

No, Mathan’s job had to stay a secret, even if he was, as Luanne had told him the afternoon she hired him, “a fucking natural at it.”

He’d sat in a hard plastic chair at HQ after tryouts, straining to keep his gaze on hers but it jumped constantly, a side effect, he’d soon learn. Never mind if they’d wrapped for the day, if the sensors had been turned off and the uHunts disabled. Once you’d allowed yourself to be chased down the city streets by strangers, your mind stayed on high alert, no matter how many times you told it to calm the fuck down.

“It’s a talent,” Luanne had said that day, the City Quest logo dangling over her shoulder like an electric octopus. “You just disappear. The clients are going to love you.”

She was right. Clients did love him, especially if he eluded them for all five days, or even better, let them almost catch him before giving them the slip. Counterintuitive, maybe, but there it was, the same shit that was true in college, true on the job: The less they had you, the more they loved you. (Not that anyone had loved him so much in college.)

Afterward, at the closing ceremony, the clients who’d come the closest, who’d lost him somehow in the dry cleaners, or who’d chased him onto a subway car just to see him receding on the platform, were the ones who held him the longest, their faces bright and beery. “Fuck!” they’d smile. “How did you even see me coming?”

He would shrug, pretend it was just dumb luck, but the truth was he always saw them coming. It didn’t matter if they strolled from his periphery or sprinted up from behind. He felt them coming like a warm wind.

“I almost had you,” they’d say and he’d agree because it made them feel good. It made him feel good. And this was the part that would have been truly impossible to explain to anyone else: How perfect he felt in that moment. How it suddenly made sense of every step he had taken, every alley he’d run down, every job he hadn’t managed to land before finding this one. The Golden Deer. The city would rise around him like glass, a sparkling labyrinth that he was finally at the center of, like those men who stepped out of black town cars without a glance backward, trusting that every day would find them in a world of comfort.

When Marley asks him to get a dinner, he almost doesn’t hear her.

They are standing in the hallway between their apartments. He is on his one-hour break.

“I was heading to the diner down the street if you want to come,” she says, blushing.

Big, his pulse roars. Big, big. He should tell her another time. The weekend, maybe, when the hunt is off. But the moment feels like a bird on a branch. It might never come back.

They walk. She is funnier than he’d anticipated. Not sarcastic, exactly, but wiry under her words, full of honesty that somehow loves and eviscerates at the same time. She tells him that her mother’s favorite possession is a leather-bound coupon binder.

“You keep checking your watch.”

His break ended twenty minutes ago. He should keep moving. There is a back door, he knows, by the kitchen, but he doesn’t want to move at all unless it’s to touch her hair. Suddenly, he sees a Hunter perched like a bird on her shoulder. A trick of perspective. The man coming to get him is actually across the intersection, waiting for the light to change. Hand jammed in his pocket, uHunt no doubt pulsing to tell him he’s close. Mathan stands and the Hunter’s head turns his way. Their eyes lock.

“I have to go to the bathroom,” he says, and the smile on Marley’s lips falters. He has the fleeting instinct to squeeze her hand then, or to even try to tell her some version of the truth, but the light is changing.