[VIRTUAL] Writing Your Community’s History: A Workshop with Fatima Shaik 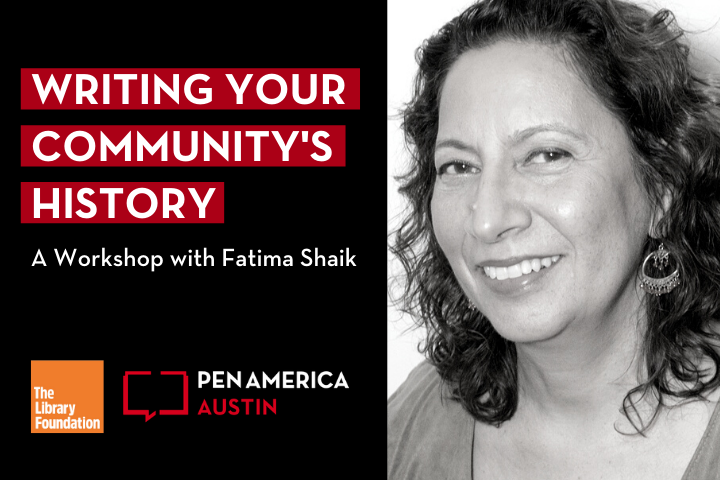 Historical resources for writing about a community are endless. For example, they exist in material culture—cloth, food, language, and song, and in traditions. A writer can take these touchstones and go into archives to build a context in which to frame an article and fiction or non-fiction book by using newspapers, genealogy sites, and primary documents in addition to interviewing.

This workshop explores these universal writing basics through the lens of ethnicity. There are millions of good stories in communities that never leave the kitchen table, even when writers are actually “in residence” for most of their lives. Writers may be stymied by a lack of knowledge—a single vein which is mined over and over. Or they have problems organizing information. The difficulties are compounded by a perceived lack of history, an idea held by either the writer or the culture, sometimes both.

The story of Black people (or people of color) in the United States does not need to be mired in loss but can achieve a common humanity which addresses universal themes. Even distinct families or communities have common experiences with others. And storytelling is an effort to make others understand something that we know. The workshop will also serve activists who may not consider themselves writers but are always called upon to tell their story or the story of their organization.

Presented by the Austin Public Library Foundation in partnership with the PEN America Austin chapter.

Fatima Shaik is the author of Economy Hall: The Hidden History of a Free Black Community, a book “so inviting that the true depth of its scholarship is revealed only in its bibliography, which lists dozens of archival and other sources,” writes The New York Times.

Washington Post reporter Felicia Sonmez has filed a lawsuit against the newspaper and several current and former top editors, alleging that she has been discriminated and retaliated against. https://wapo.st/2WemEeX

If @Twitter is serious about its public commitment to @webfoundation to protect women facing online abuse, here are 5 steps @PENAmerica recommends they take to give users more control over their privacy & security: https://bit.ly/3B4VEyv #FightOnlineAbuseNOW