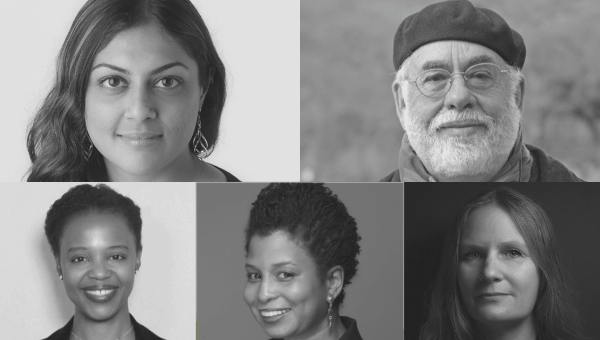 Since 1851, The New York Times Obituary desk has published thousands of eulogies, most of them recounting the lives and achievements of remarkable white males. Our new series “Overlooked” seeks to right the wrongs of omission by writing the stories of incredible women and minorities who were left out of The Times’s obit pages.

To celebrate the series, The Times and PEN America invite you to a live reading and conversation on surfacing these forgotten stories. Join series editor Amy Padnani, Times reporter Nikita Stewart, and best-selling author Lidia Yuknavitch at Hollywood Forever Cemetery to discuss the series’s impact in the era of the #MeToo movement and beyond. Times Assistant Managing Editor Monica Drake will moderate a discussion about the power of the written record—from its omissions to its inclusions—and the work of maintaining it.

Atsuko‘s comedy has been described by Margaret Cho as “a silent slow fart that fills up a room with laughter.” Her TV credits include Comedy Central Presents: Stand Up, Asia!, and HBO’s Room 104. You can now also catch her first ever hour special on HULU as part of Comedy Invasian. She tours around the United States at colleges & universities and with Dis/orient/ed Comedy, the first ever all Asian, mostly female stand up comedy tour. When not telling jokes on stage, she writes, produces, and acts in videos that have been featured on Elizabeth Banks’s digital platform, WhoHaha, Buzzfeed, and MOCATV.

Monica Drake is the assistant managing editor for The New York Times, overseeing special editorial, digital, and other initiatives. Before that, she was a senior editor who managed Travel and worked on strategic projects. As Travel editor, she reimagined the annual destination list of places to go into the 52 Places multimedia feature that sends one reporter around the world, and she started Surfacing, a cross-platform column focused on subcultures around the world. Monica has worked on the Metro Desk, Weekend Arts, and Arts & Leisure. During her tenure as Travel editor, the section was awarded the best newspaper travel section by the Society of American Travel Writers, received an award from the Society of News Design, and works she published were included in the Best American Travel Writing anthology.

Francis Ford Coppola is best known as the six-time Academy Award-winning director, writer, and producer of such epic films as the Godfather trilogy and Apocalypse Now. And while Coppola has been making films for more than 50 years, he’s also been producing wine for almost 40. In 2017, Francis crafted an ensemble of spirits in the name Great Women Spirits, to celebrate important historical women who defied their social conventions and made history. He created these award-winning spirits that are as unique and remarkable as the women they honor, including Ada Lovelace.

Amy Padnani has been a digital editor at The New York Times for seven years. She currently works on the obituaries desk, where she launched “Overlooked,” a series telling the stories of remarkable people who never received a New York Times obit. The project has inspired a television series. Before that, she was a home page editor on the news desk, which included a stint in Hong Kong. She was also a web producer and digital storyteller on national and business and various other desks, and she has spent several months as a copy editor on the metro, business, foreign national, and live desks. She has served as co-chair of two employee groups, the Asian Network and the Times Run Club.

Storm Reid can be seen starring as ‘Meg’ in Disney’s live action adaptation of the acclaimed children’s novel, A Wrinkle in Time, directed by Ava DuVernay and starring Oprah Winfrey, Reese Witherspoon, Chris Pine, and Mindy Kaling. Storm also is well known for her role of ‘Emily’ in the Oscar Award Winning feature, 12 Years a Slave. Her television credits include guest star roles on NBC’s Chicago P.D. and CBS’ NCIS: Los Angeles. Next up, Storm will be seen in Blumhouse’s Only You, in which she stars opposite David Oyelowo.

Michele Selene Ang just finished filming a guest star role on the CBS series Elementary. She can currently be seen on Netflix’s 13 Reasons Why. She just graduated from Fordham University, and recently played the lead in the Claire Tow Theater production of A Bull in A China Shop.

Nikita Stewart is a reporter covering social services with a focus on City Hall in New York City for the New York section. She joined The New York Times in 2014 after working at The Washington Post, The Star-Ledger in New Jersey, The Journal News in Westchester County, and The Courier-Journal in Louisville, KY, and was a 2013 IRE Awards finalist and Livingston Award finalist in 2001. She wrote the “Overlooked” obituary for Bessie B. Stringfield, the “Motorcycle Queen of Miami.”

Lidia Yuknavitch is the author of the best-selling novels The Small Backs of Children, which won the Oregon Book Award, and The Book of Joan, currently published and translated in six different countries. Her memoir, The Chronology of Water, was recently optioned for film by Kristen Stewart. She is also the author of The Misfit’s Manifesto, a book based on her TED Talk “The Beauty of Being a Misfit” that has to date received over 2,500,000 views. She earned her PhD from the University of Oregon where she wrote a book on war and narrative form. She founded the Corporeal Writing workshops in Portland, Oregon. She is a very good swimmer.