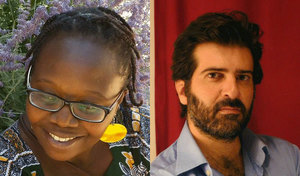 The International Play Festival features plays from eight different countries. Join some of the world’s most respected dramatists in a conversation on art, politics, dreams, war, and philosophy, meant to give American audiences a rich awareness of the greater global dialogue.

The Animal of Time by Valère Novarina, translated by Amin Erfani, directed by Valéry Warnotte, with Chris Kayser (France)
7:30–9pm
The Animal of Time is a performance of the English translation of Valère Novarina’s “L’Animal du temps,” a theatrical adaptation of “Le Discours aux animaux.” In this musical performance, the protagonist speaks to animals—that is to say the audience—while taking them on a journey into the depth of language, one that reinvents itself every time the actor opens his mouth. He takes the audience into moments of inner darkness where speech and language are experienced through cataclysms of sounds and rhythms as though they were heard for the very first time.

Strings by Angella Emurwon (Uganda)
2–3:30pm
After 20 years away, Baaba, the family patriarch, is set to return home. Maama has ruled the homestead with a firm hand and acrid tongue, and has created a family myth that helps her maintain status in the community and keep the rest of the family in line. The return of Baaba forces her now-grown children to evaluate their relationships with Maama and their place in the world, while Uncle Lokil, Baaba’s brother and Maama’s on-again off-again lover, sees Baaba’s return as an opportunity to regain his rightful place in Maama’s life.

My Uncle, the Exile by Yerandy Fleites Pérez, translated by Julián Mesri (Cuba)

5–6:30pm
Based on real events, My Uncle, The Exile tells the story of Evaristo, a Cuban exile who has decided to return to his homeland after being banished for homosexuality during the Mariel boatlift in 1980. His family is forced to confront the brutal policies of the Cuban government, which is making every effort to exile Evaristo again.

Ant Street by Roland Schimmelpfennig (Germany), translated by David Tushingham
7:30–9pm
A family has waited 42 years for the package from abroad when it finally arrives. Its contents are disappointing: a cheap ballpoint pen, a ten year old pocket calendar, a blonde wig, tiny packets of detergent, a spoon, and an empty mustard jar wrapped in an old newspaper in a language that nobody understands. No letter, no explanation. But when they discover a message hidden in the in the newspaper, everything changes.

Picnic by Joned Suryatmoko (Indonesia)
2–3:30pm
Hilmar, Sobirin and Wid have come to Bali to be happy. Hilmar wants to see Tanah Lot with a pretty woman on his arm, like the cigarette ad he saw on a billboard. Wid wants to cure the pain of never having visited any beautiful places in his whole life. Sobirin has come to Bali because if his friend Hilmar is happy, he will be happy too. However, when they end up working as bathroom attendants in the lobby of a luxury hotel in Bali, they struggle to find what they’re looking for.

Black Maria on Koinange Street by Sitawa Namwalie (Kenya)
5–6:30pm
A young African woman from a privileged upper middle-class family comes of age learning how to survive in an African country at the time of the dictatorships of the 1980s. She has to navigate life away from the safety of her family and learn how to survive.  An encounter with the police and other night creatures exposes the underbelly of her charmed existence when she discovers the harshness and precariousness of life on the city streets of Nairobi at night.

Spam by Rafael Spregelburd, translated by Jean Graham-Jones (Argentina)
7:30–9pm
A university professor specializing in dead languages refuses to advise his best student’s thesis. Instead, he replies to spam in his inbox, giving the details of his bank account to a poor Malayan girl in need of help to rescue her dead father’s fortune. What if the spam turns out to be real? A deluge of adventure, linguistics, love, and despair built by the poorly recalled fragments of a decaying society at the point of becoming entirely virtual, Spam is a brutal joke on the end of Europe.