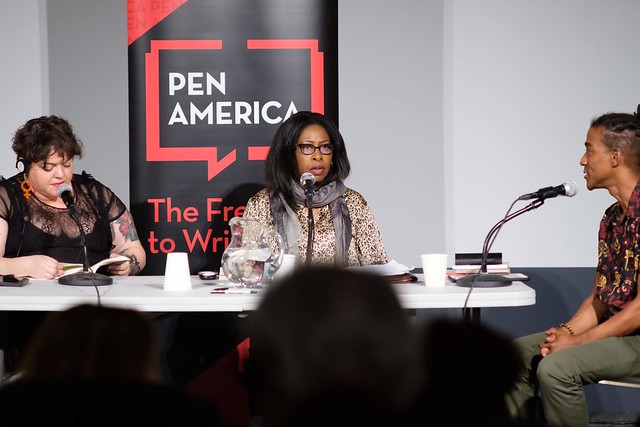 Join authors Scholastique Mukasonga (The Barefoot Woman, Cockroaches) and Randa Jarrar (A Map of Home; Him, Me, Muhammad Ali) in conversation on writing womanhood—the work of mothers and daughters across time and place facing genocide, tradition, and memory. Moderated by Edwin Hill, Associate Professor of French and Italian and American Studies and Ethnicity at the University of Southern California. A book signing will follow with Eso Won Books.

This event will be held in both French and English.

This event is presented in partnership with the Consulate General of France in Los Angeles. It is one of the 2019 PEN America World Voices Festival Los Angeles events.

Edwin Hill is an Associate Professor at the University of Southern California with appointments in the Department of French & Italian and the Department of American Studies & Ethnicity. His research lies at the intersections of music and literature, with a focus on histories of race and modernity, theories of sound, post/colonialism and black women writers and musicians, black Atlantic and Mediterranean noir fiction, and popular musical forms and cultural practices. He published his book Black Soundscapes White Stages: The Meaning of Francophone Sound in the Black Atlantic at Johns Hopkins University Press (African diaspora series, 2013). Articles appear in Ethnomusicology Forum, the Journal of Popular Music Studies, and Negritud: Journal of Afro-Latin American Studies. His book-in-progress deals with black rage and sound cultures in France and the US.

Randa Jarrar’s work has appeared in The New York Times Magazine, Buzzfeed, Salon, Guernica, and others. Her first book, the Arab-American coming of age novel A Map of Home, won a Hopwood Award and an Arab-American Book Award. Her most recent book, Him, Me, Muhammad Ali, won an American Book Award, a PEN Oakland Award, and a Story Prize Spotlight Award. Jarrar is a columnist for Bitch Magazine and was the PEN Ten Interviews editor in 2016-17. She is the Executive Director of RAWI, a literary nonprofit that serves Arab-American writers. Jarrar has received fellowships from the Civitella Ranieri Foundation, the Lannan Foundation, Hedgebrook, and others. In 2010, she was named one of the most gifted writers of Arab origin under the age of 40. She is the translator of several Arabic short stories and a novel, and has taught for MFA programs at CSU-Fresno and Sierra Nevada College, and at Tin House’s Summer Workshop. She holds an MFA from the University of Michigan, where she was a Zell Fellow.

Scholastique Mukasonga is a Rwandan author. Her family was displaced within Rwanda during her childhood, and she was later forced to flee to Burundi and then to France, where she settled in 1992. She lost 27 members of her family in the Rwandan genocide. Mukasonga wrote two acclaimed memoirs about her family’s experiences, Cockroaches and The Barefoot Woman, as well as the novel Our Lady of the Nile, which received the Prix Renaudot.

Seeing Beyond Satire and Stereotypes