Whose Freedom, Whose Speech? The Future of Community and Free Speech at University of Virginia 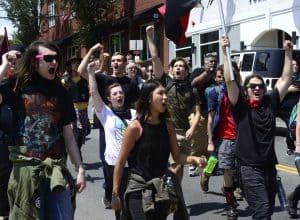 How can universities advance equality and inclusion while protecting free speech? Join students, staff, and faculty via livestream or on campus at University of Virginia’s McLeod Hall, Room 1020, for a public panel discussion featuring a lively audience Q&A. The event will be moderated by University of Maryland Chief Diversity Officer and Executive Director of the Center for Diversity and Inclusion Roger Worthington, with PEN America CEO Suzanne Nossel, The New Yorker contributor and director of the Ira A. Lipman Center for Journalism and Civil and Human Rights at Columbia University Jelani Cobb, Vice Dean and Professor of Law at the University of Virginia Leslie Kendrick, and UVA student Alexis Gravely.

Doors will open at 6:15pm, with seating available until filled.

PEN America stands at the intersection of literature and human rights to protect open expression in the United States and worldwide. This event is part of a national effort to foster dialogue about free speech and diversity on U.S. college campuses, including events at the University of California, Berkeley; Middlebury College; and University of Maryland, College Park.

Jelani Cobb is director of The Ira A. Lipman Center for Journalism and Civil and Human Rights, and Columbia University’s Ira A. Lipman Professor of Journalism. He joined the faculty in 2016. He has contributed to The New Yorker since 2012 and became a staff writer in 2015. Dr. Cobb is the recipient of the 2015 Sidney Hillman Award for Opinion and Analysis writing, and writes frequently about race, politics, history and culture. Dr. Cobb is also a recipient of fellowships from the Fulbright and Ford Foundations. He is the author of “The Substance of Hope: Barack Obama and the Paradox of Progress,” “To the Break of Dawn: A Freestyle on the Hip Hop Aesthetic” and “The Devil & Dave Chappelle and Other Essays.” His work has appeared in The Washington Post, The New Republic, Essence, Vibe, The Progressive and TheRoot.com. He has also contributed to a number of anthologies including “In Defense of Mumia,” “Testimony,” “Mending the World and Beats” and “Rhymes and Life.” Dr. Cobb is editor of “The Essential Harold Cruse: A Reader.” Born and raised in Queens, New York, he is a graduate of Howard University and Rutgers University, where he received his doctorate in American History.

Alexis Gravely is a third-year student at UVA studying media studies and elementary education. She has been a part of The Cavalier Daily since her first year and now serves as the newspaper’s assistant managing editor. Her most notable work includes her coverage of the August 11 and 12 white supremacist rallies in Charlottesville. Additionally, she is a part of the highly-competitive “Black on Campus” program, which allows emerging black journalists to sharpen their professional skills while documenting the experiences of black college students.

Leslie Kendrick, Vice Dean and Professor of Law at University of Virginia School of Law, is an expert in the First Amendment and freedom of expression, particularly the scope and structure of free speech rights. She writes and teaches courses in torts, property and constitutional law. Her work has appeared in the Harvard Law Review, Columbia Law Review, Michigan Law Review, Virginia Law Review, the Supreme Court Review, Legal Theory, and Philosophy & Public Affairs. Kendrick received a B.A. in classics and English as a Morehead Scholar at the University of North Carolina at Chapel Hill. She received her master’s and doctorate in English literature at the University of Oxford, where she studied as a Rhodes Scholar. She earned a J.D. as a Hardy Cross Dillard Scholar at UVA, where she served as essays development editor for the Virginia Law Review and received the Margaret G. Hyde Award, the Law School Alumni Association Best Note Award, the Judge John R. Brown Award for Excellence in Legal Writing, the Food & Drug Law Institute H. Thomas Austern Short Paper Award, and the Virginia State Bar Family Law Book Award. Before joining the faculty in 2008, Kendrick clerked for Judge J. Harvie Wilkinson III of the U.S. Court of Appeals for the Fourth Circuit and Justice David Hackett Souter of the Supreme Court of the United States. She has been a visiting professor at UCLA Law School and Harvard Law School.

Roger Worthington became Interim Associate Provost and Chief Diversity Officer at the University of Maryland on July 6, 2017. He is a Professor in the Department of Counseling, Higher Education, and Special Education where he served as chair from August 1, 2014 until July 5, 2017. He is the founder and Executive Director of the Center for Diversity and Inclusion in Higher Education at the University of Maryland, and the outgoing editor of the Journal of Diversity in Higher Education. Dr. Worthington has taught courses to undergraduate and graduate students on ethics and law for professional psychology, counseling and interpersonal skills, research design, measurement, multicultural counseling, and difficult dialogues. He is a nationally recognized scholar and higher education consultant on issues of diversity in counseling and education. He has won numerous awards for academic, service, and teaching excellence. Prior to arriving at UMD, Dr. Worthington was a professor at the University of Missouri (1997-2014) with a joint appointment in the Department of Educational, School and Counseling Psychology and the Department of Educational Leadership and Policy Analysis. His first faculty appointment was at Boston College (1994-1997). He received his doctorate in counseling psychology in 1995 from the University of California at Santa Barbara.

Suzanne Nossel, since joining PEN America in 2013, has overseen a doubling of the organization’s staff and budget. She is a leading voice on free expression issues in the U.S. and globally, writing and being interviewed frequently for national and international media outlets. Her prior career spanned government service and leadership roles in the corporate and nonprofit sectors. She has served as the chief operating officer of Human Rights Watch and as executive director of Amnesty International USA. During the first term of the Obama Administration, Nossel served as Deputy Assistant Secretary of State for International Organizations, where she led U.S. engagement in the United Nations and multilateral institutions on human rights and humanitarian issues. During the Clinton Administration, Nossel was Deputy to the U.S. Ambassador for UN Management and Reform at the U.S. Mission to the United Nations, where she was the lead negotiator in settling U.S. arrears to the world body. Nossel is a magna cum laude graduate of both Harvard College and Harvard Law School.

Cosponsored by University of Virginia Office of the President and presented with generous support from the John S. and James L. Knight Foundation and the Cameron Schrier Foundation.