[VIRTUAL] Misinformation and the Election in Pennsylvania: A #WhatToExpect2020 Town Hall 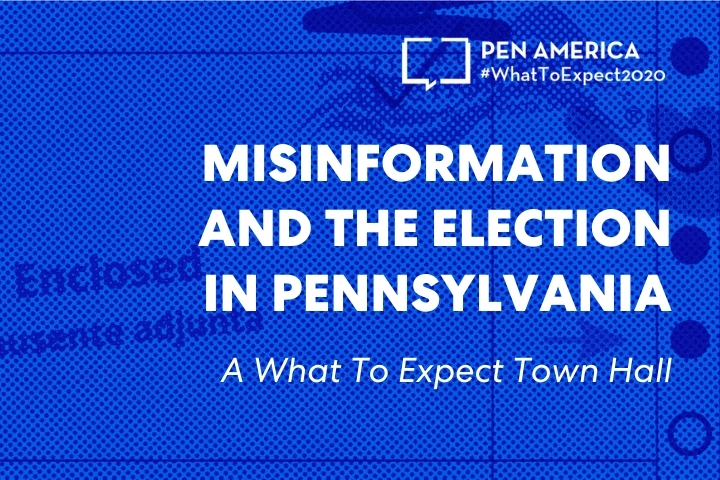 Join PEN America, Committee of Seventy, WHYY, The Philadelphia Inquirer, and the Reading Eagle for a live town hall with trusted journalists and community organizers in conversation about what voters in Pennsylvania can expect from the upcoming November election. With misinformation being a constant threat, Pennsylvania communities are relying on local and community news organizations, as well as voting rights advocates, to receive the most up-to-date and accurate election information. Join us to meet some of the journalists and community organizers doing this important work. If you plan to tweet about the event, follow us on Twitter at @penamerica and use the hashtag #WhatToExpect2020.

This virtual conversation is free and open to the public. We encourage community members to come prepared to ask journalists and election experts any questions about voting in the upcoming election in Pennsylvania.

Ashley Session is the director of civic engagement and partnerships at Committee of Seventy, a nonpartisan civic leadership organization that advances representative, ethical, and effective government in Philadelphia and Pennsylvania through citizen engagement and public policy advocacy.

Adam Richter is a digital news editor and columnist for the Reading Eagle in Reading, Pennsylvania. A professional journalist for more than 15 years, Adam often writes about the intersection of technology, news and society. He received his bachelor’s degree in philosophy and political science from the University of Pittsburgh. Adam grew up in Berks County, where he currently lives with his wife, daughter and dog.

Jonathan Lai is a reporter at The Philadelphia Inquirer where he focuses on voting and elections and uses data to explore those topics, including voting rights, gerrymandering, election security, demographics, voting patterns, and campaign finance.

The panel will be moderated by Susan Phillips from WHYY. Phillips tells stories about the consequences of political decisions on people’s every day lives. She has worked as a reporter for WHYY since 2004 covering politics including the 2008 Presidential primary. In 2010 she produced an award-winning series on Pennsylvania’s natural gas rush called “The Shale Game.” She received a 2013 Alfred I. DuPont-Columbia University Journalism Award for her work covering natural gas drilling in Pennsylvania. She has also won several Edward R. Murrow awards for her work with StateImpact. In 2013/14 she spent a year at MIT as a Knight Science Journalism Fellow. She has also been a Metcalf Fellow, an MBL Logan Science Journalism Fellow and reported from Marrakech on the 2016 climate talks as an International Reporting Project Fellow.

The PEN Ten: An Interview with Yamile Saied Méndez

Our CEO @SuzanneNossel alongside @EricHolder, @rweingarten, @dziblatt are live now as part of a democracy town hall.

Author of tell-all on Melania Trump, @SWWCreative, is sued by @TheJusticeDept for violating confidentiality provisions of a long-expired gratuitous services agreement she signed as a volunteer adviser to @FLOTUS. Our tax dollars at work. https://www.nbcnews.com/politics/justice-department/justice-department-sues-author-over-book-about-her-relationship-melania-n1243229

How can publishers and activists work together in the fight for racial justice? Join our upcoming dialogue on Thursday 10/15 at 5PM ET live on PEN America's Facebook page at http://facebook.com/penamerica. RSVP ahead of time at https://bit.ly/2SXDp93.