[VIRTUAL] Misinformation and the Election in Michigan: A #WhatToExpect2020 Town Hall 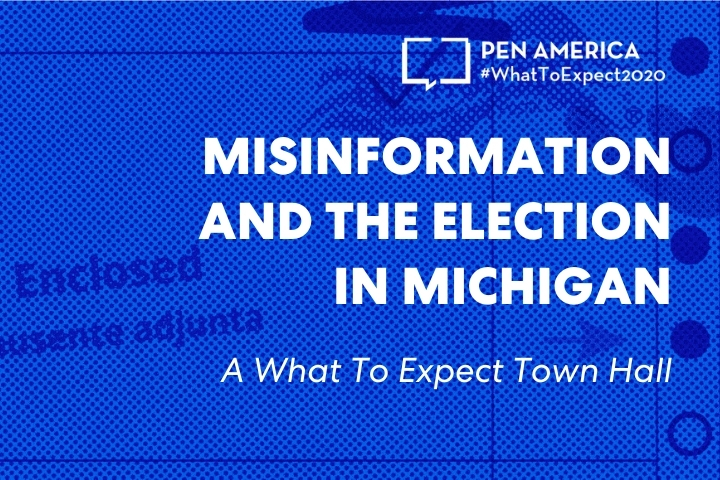 Join PEN America, the ACLU of Michigan, Voters Not Politicians, Detour Detroit, WDET, and All Voting is Local Michigan for a live town hall with trusted journalists and community organizers in conversation about what voters in Michigan can expect from the upcoming November election. With misinformation being a constant threat, communities across Michigan are relying on local and community news organizations to receive the most up-to-date and accurate election information. Join us to meet some of the journalists doing this important work. If you plan to tweet about the event, follow us on Twitter at @penamerica and use the hashtag #WhatToExpect2020.

This virtual conversation is free and open to the public. We encourage community members to come prepared to ask journalists and election experts any questions about voting in the upcoming election in Michigan.

Nancy Wang is the executive director and a founding member of Voters Not Politicians. As a VNP volunteer, Wang led the policy committee that wrote the constitutional amendment language with input from the public, and served as Board President during the Proposal 2 campaign. Wang is an attorney and received her bachelor’s degree in environmental engineering from the University of Michigan and her law degree from the University of Michigan Law School. Prior to leading Voters Not Politicians, she was the director of the Environmental Law Clinic at the University of Michigan Law School. She is thrilled to have the privilege of leading this powerful, one-of-a-kind, citizen-driven movement to strengthen democracy in our state.

Aghogho Edevbie is All Voting is Local’s Michigan state director. Prior to joining the campaign, Edevbie worked as an attorney for Wayne County, MI and was a candidate for the Michigan House of Representatives in 2018. Edevbie has been actively involved in voter protection efforts since 2010, primarily recruiting and organizing fellow attorneys to be poll workers and poll watchers on Election Day. Prior to becoming an attorney, Edevbie spent time in Tanzania, where he taught at St. Peter Claver High School and climbed Mt. Kilimanjaro. He also interned with the Michigan Supreme Court and with Federal Judge Arthur Tarnow. A Detroit native, Edevbie has a bachelor’s degree in political science from the University of Michigan and a juris doctorate from the University of Michigan Law School.

Kate Abbey-Lambertz is the co-founder and editorial director for Detour Media. She leads editorial strategy for the signature Detour Detroit newsletter, The Blend and special projects, while shaping Detour’s membership program, audience development initiatives and design. Abbey-Lambertz was previously a national reporter at HuffPost, where she covered equitable cities and urban issues. She launched HuffPost’s Detroit vertical, serving as reporter and editor, and has reported on Detroit for a decade.

Laura Herberg is a Community Reporter for 101.9 WDET, telling the stories about people inhabiting the Detroit region and the issues that affect us here. Herberg is a 2019 summer Inequitable Development Fellow for the Race and Justice Reporting Initiative at the Detroit Equity Action Lab, a program of the Damon J. Keith Center for Civil Rights. She was also named the Michigan Associated Press Best Reporter for radio broadcasting in 2018 and 2017. In 2012, she was awarded a SoundCloud Fellowship for her project, “Listen to Detroit.” Herberg is a “counselor” for the local listening group, Radio Campfire. She also is the creator of Complete Me, a podcast with only three episodes about how she has trouble completing tasks.

Sharon Dolente is the Voting Rights Strategist for the ACLU of Michigan. Tired of years spent playing defense, attorney and voting rights strategist, Dolente wanted to engage in a game-changing effort to ensure full and fair access to the ballot for all Michigan voters. That game-changing effort became Proposal 3 (Promote the Vote), a ballot initiative Dolente played a key role in writing and leading, which was overwhelming approved by the voters of Michigan in November 2018. As a result, all of Michigan’s registered voters can access an absentee ballot without giving a reason, citizens will be automatically registered at the Secretary of State, and citizens can register to vote right up to and on Election Day. Dolente has participated in voter protection efforts since 2004 and also has more than a decade of experience in private practice both in civil rights and criminal defense. Today, Dolente continues the fight for full and fair access to the ballot.

Congratulations, @BarackObama! We can't wait for your conversation with Ron Chernow at the 2020 virtual #PENgala on December 8th. #APromisedLand https://twitter.com/PENamerica/status/1331586989704011779

I can’t believe it, @BarackObama will be joining our @PENamerica virtual gala this December. Feels auspicious as we ready for 2021, continuing to fight for facts, freedom, and a more inclusive vision of free expression. https://www.eventbrite.com/e/pen-america-virtual-gala-tickets-130352705451