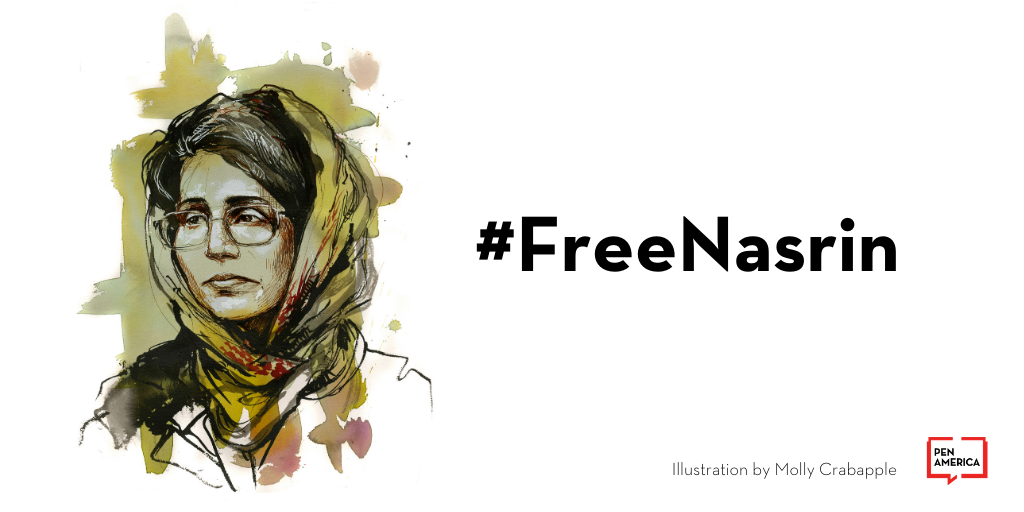 As the United Nations marks the opening of its 75th anniversary General Assembly, Iranian activist and writer Nasrin Sotoudeh will mark the 42nd day of her hunger strike. Sotoudeh, Iran’s leading women’s rights lawyer, is demanding the release of political prisoners during the COVID-19 pandemic. Who is the woman described as Iran’s Mandela? Why does the situation of Sotoudeh and Iran’s political prisoners matter? And why must the world’s leaders, gathered at the UN, defend the UN Charter—principles of law, rights, dignity, and freedom—reflected in the plight of one woman?

Join PEN America and Convisero for a discussion of the dire and urgent situation of Sotoudeh, who is currently held in Tehran’s infamous Evin prison, and of the human rights denied her and all prisoners of conscience. She has been charged with acting against Iran’s national security through her advocacy on behalf of detained women who had protested Iran’s compulsory hijab law. She has been sentenced to a total of 38 years in prison and 148 lashes.

Convisero is an initiative of the higher education consultancy, The Trebuchet, founded by Sherman Teichman. It is the virtual hub and intellectual incubator for the community that evolved over Teichman’s five-plus decades of teaching, mentoring, and activism. Convisero represents a wealth of experience; unique, disparate perspectives; intense energy; and most importantly, a shared humane ethos. Convisero is a call to unite, and seeks to stimulate the thinking and collaboration necessary to confront the world’s most pressing problems.

This digital event is free and open to the public. Please register before the event.

Karin Deutsch Karlekar is the director of PEN America’s Free Expression At Risk Programs, and leads PEN America’s assistance to individuals at risk as a result of their expression. She has almost two decades of experience in global free expression, press freedom, and digital rights issues, as well as advocacy and assistance work on behalf of writers, bloggers, and journalists.

Amir Soltani is an Iranian-American writer, filmmaker, and a human rights activist. Soltani is the author of Zahra’s Paradise, a graphic novel on protest and dissent in Iran. Zahra’s Paradise has been nominated for two Eisner Awards and translated into 16 languages. Soltani is a former PEN Center USA board member.

Honorable Irwin Cotler is founder-chair of the Raoul Wallenberg Centre for Human Rights, emeritus professor of Law at McGill University, former minister of justice and attorney general of Canada, longtime member of parliament, international human rights lawyer, and counsel to prisoners of conscience.

Sherman Teichman is the founding director emeritus (1985–2016) of the Institute For Global Leadership at Tufts University, and the founding president of The Trebuchet—whose motto is “Breaking Down Barriers and Building Bridges.” A senior fellow with the Carr Center for Human Rights Policy at Harvard University, (2017–2019), he is a senior fellow at the Raoul Wallenberg Centre for Human Rights, and senior strategic advisor for the Human Rights Foundation.