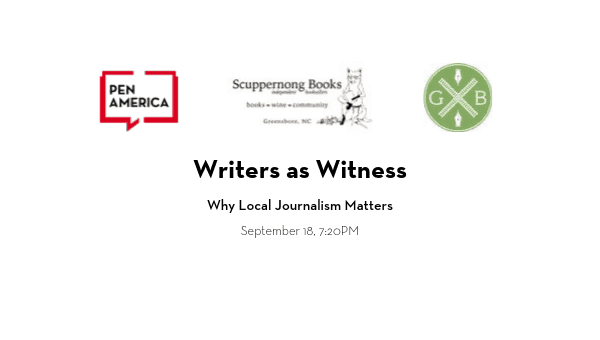 In May 2018, five immigrant children died in a fire in a sub-standard housing complex in Greensboro. The complex was owned by a realty company known to rent uninhabitable apartments without water or heat to immigrants or the disadvantaged. Spurred, in part, by this tragedy, local media began investigating housing in the Triad.

Other local journalists have been reporting on the rise of White Nationalism in North Carolina, the removal of Civil War statues, the increased visibility of the KKK and other neo-Nazi groups, and the continuing debate over history versus heritage.

PEN America has collaborated with Scuppernong Books and Greensboro Bound to bring these journalists together to discuss their work in local media. In a shifting, and sometimes precarious media landscape, how does local journalism work, who does it, and can it inspire change? In this conversation, the focus is on local reporting of housing issues in 2019.

Jeffrey Billman, Executive Editor, Indy Week, Raleigh-Durham
Indy Week is a tabloid style weekly and has been instrumental in covering the conflicts over Confederate Statues in the Raleigh-Durham area, the rise of White Nationalism in the State, as well as music, art, and culture in the Triangle area. Indy Week was founded in 1983.

Phoebe Zerwick, Freelance Journalist, Faculty, Wake Forest University
Phoebe has over twenty years of experience as an investigative reporter, narrative writer, and newspaper editor. In 2003, she wrote an eight-part investigative for the Winston Salem Journal about the wrongful conviction for murder of Darryl Hunt. A month after the story ran, DNA evidence led to Hunt’s release. She currently directs the Journalism Program at Wake Forest University.

Bethany Chafin, Reporter, WFDD, NPR affiliate, Winston Salem
In 2019, WFDD, in a collaboration with the Carolina Data Desk at the UNC School of Media and Journalism and Wake Forest University’s journalism program, produced a multi-part radio series on Housing Issues in the Triad.