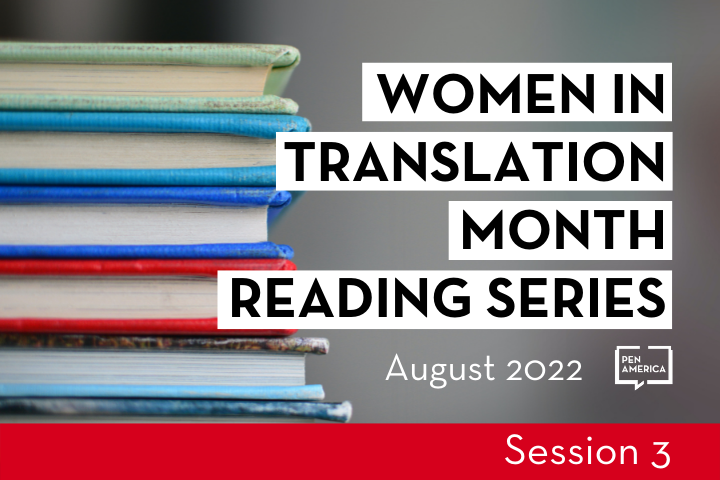 Katherine E. Young is the poet of Woman Drinking Absinthe and Day of the Border Guards. She has translated memoir by Anna Starobinets, fiction by Akram Aylisli, and poetry from Russia, Ukraine, and Kazakhstan. Young, a 2017 NEA translation fellow, served as the inaugural poet laureate for Arlington, Virginia.

Sangeeta Bandyopadhyay is the author of Abandon, Panty, and The Yogini. She has published nine novels and over fifty short stories since her controversial debut, Shankini. Sangeeta lives in Kolkata.

Ibrahim Sayed Fawzy is an assistant lecturer and emerging translator from Egypt. He has an MA in comparative literature. @IbrahimSayedF1

Slava Faybysh’s first book-length translation was published by AK Press in 2021. Other translations of his have appeared on Asymptote Journal, Lunch Ticket, and Another Chicago Magazine.

Rema Hmoud is a Palestinian-Jordanian writer who lives in Kuwait and works as a teacher of Arabic. She has authored three novels and two short-story collections.

Ainur Karim is an up-and-coming Kazakh playwright. Her play, The Passport, recently won the prestigious BBC International Playwriting Competition and is set to be read on-air in the fall.

Ali Kinsella has been translating for ten years. With Dzvinia Orlowsky, her co-translation of Natalka Bilotserkivets’s poems, Eccentric Days of Hope and Sorrow, was shortlisted for the 2022 Griffin Poetry Prize.

Halyna Kruk is a Ukrainian writer, translator, educator, literary critic, and former VP of PEN Ukraine. In 2003, she was awarded the Gaude Polonia Fellowship by the Polish Ministry of Culture.

Caroline Wilcox Reul’s translations from German include In the morning we are glass by Andra Schwarz, Who Lives by Elisabeth Borchers, and many journal publications, including Exchanges, Waxwing, and LIT Magazine.

Andra Schwarz is the author of Am morgen sind wir aus glas. Her forthcoming collection will appear from Poetenladen in Winter 2022/23. Her poems can be found in journals such as Transistor, Konzepte, and Signaturen.

Arunava Sinha translates Bengali fiction and non-fiction into English and English fiction into Bengali. Over 70 of his translations have been published in India, the UK, and the US.

Ellen Vayner’s previous co-translations with Brian Baer were shortlisted for the EBRD Prize. The latest translation of Mikhail Shevelev’s Not Russian is coming out this October from Europa Editions.

I spoke to @The_NewArab Voice last week about what's next for the international community on #Iran. I talk about how we failed to use leverage to improve human rights, democracy benchmarks, and a positive platform to support democracy in Iran. https://tinyurl.com/y65es9je
#MahsaAmini