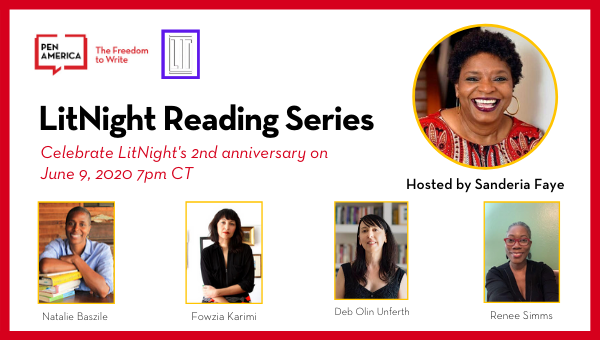 Founder and host of LitNight Sanderia Faye says, “This anniversary shows the dedication that Dallas and Fort Worth have toward creating a literary city. The authors and audience are the reason we have thrived, and the four powerhouse authors featured for our anniversary celebration are a testament to our survival.”

LitNight is a monthly reading series featuring some of the most exciting established and emerging writers to come out of Dallas, and the literary community at large. This month’s virtual reading will feature Deb Olin Unferth, Renee Simms, Fowzia Karimi, and Natalie Baszile.

Sanderia Faye serves on the faculty at Southern Methodist University, and is a professional speaker, activist, and sommelier. Her novel, Mourner’s Bench, is the winner of the Hurston/Wright Legacy Award in debut fiction, the Philosophical Society of Texas Award of Merit for fiction, and the 2017 Arkansas Library Association’s Arkansiana Award. She is the host of LitNight Reading Series.

Natalie Baszile is the author of Queen Sugar, which has been adapted for television by writer/director Ava DuVernay and co-produced by Oprah Winfrey.  Her new nonfiction book, We Are Each Other’s Harvest: Celebrating Black Farming, Land & Legacy, is forthcoming from HarperCollins (Fall 2020). Baszile has had residencies at the Ragdale Foundation, VCCA, Hedgebrook, and Djerassi—where she was the SFFILM and Bonnie Rattner Fellow. Her nonfiction work has appeared in Lenny Letter, The Bitter Southerner, O, The Oprah Magazine, and numerous anthologies. She has taught fiction in the MFA Program at Saint Mary’s College and is on the MFA faculty of Sierra Nevada University. Baszile is a current resident at SFFILM and a member of the San Francisco Writers’ Grotto.

Fowzia Karimi was born in Kabul, Afghanistan. She immigrated to the United States in 1980, after the Soviet invasion of the country. Karimi has a background in studio art and biology. She received her MFA in creative writing from Mills College, California. Her work explores the correspondence on the page between the written and the visual arts. She is a recipient of The Rona Jaffe Foundation Writers’ Award, and has illustrated The Brick House by Micheline Aharonian Marcom and Vagrants and Uncommon Visitors by A. Kendra Green. She lives in Texas.

Deb Olin Unferth is the author of six books, including the novel Barn 8. Her essays and fiction have appeared in Harper’s Magazine, The New York Times, The Paris Review, Granta, VICE, and McSweeney’s. She has received a Guggenheim fellowship, three Pushcart Prizes, and was a finalist for the National Book Critics Circle Award. She is an associate professor at the University of Texas in Austin. She also runs the Pen City Writers, a program of creative writing workshops at a prison in south Texas.

Renee Simms’ debut story collection, Meet Behind Mars, was a Foreword Indies finalist and listed by The Root as one of the 28 brilliant books by black authors in 2018. She has received fellowships from the National Endowment for the Arts, Bread Loaf. She teaches at the University of Puget Sound and in the Rainier Writing Workshop, the MFA program at Pacific Lutheran University.