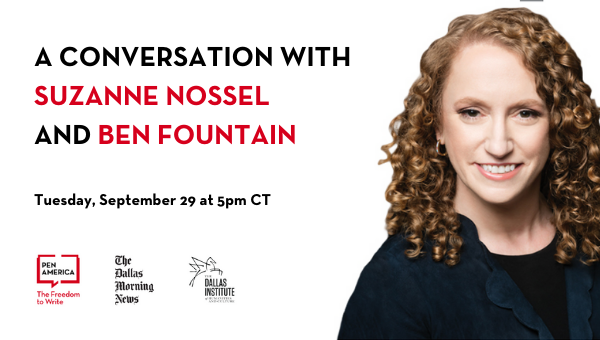 In partnership with The Dallas Institute and The Dallas Morning News, PEN America Dallas/Fort Worth is excited to welcome Suzanne Nossel, CEO of PEN America, for a virtual event to discuss her new book. Dare to Speak: Defending Free Speech for All is a playbook for navigating and defending free speech today, for paving a pathway that promotes free expression while also cultivating a more inclusive public culture. Centered on practical principles, Nossel’s primer equips readers with the tools needed to speak one’s mind in today’s diverse, digitized, and highly-divided society without resorting to curbs on free expression. Nossel will be in conversation with PEN America Member Ben Fountain, a local Dallas writer.

This event is the first in a three-part series, where six prominent writers engage in candid conversation through a variety of mediums about the issues that matter most to us in this historical moment and how public discourse, stories, and images influence what we aspire to achieve in the realm of action.

Register in advance for the event. After registering, you will receive a confirmation email containing information about attending the event on Tuesday, September 29 at 5pm CT. Copies of Dare to Speak can be purchased on Bookshop. (10 percent of all sales of the book through this link on Bookshop go to PEN America.)

Ben Fountain’s most recent book is Beautiful Country Burn Again: Democracy, Rebellion, and Revolution, and is based on the Pulitzer Prize-nominated essays and reportage that he wrote on the 2016 presidential election for The Guardian. He is also the author of a novel, Billy Lynn’s Long Halftime Walk, which in 2016 was adapted for film by three-time Oscar winner Ang Lee, and a short story collection, Brief Encounters with Che Guevara. His work has received the National Book Critics’ Circle Award for Fiction, the PEN/Hemingway Award, the Los Angeles Times Book Award for Fiction, the Flaherty-Dunnan First Novel Prize, a Whiting Writer’s Award, an O.Henry Award, and two Pushcart Prizes, and has been a finalist for the National Book Award in both the U.S. and the U.K. (international authors division). His fiction and nonfiction have appeared in The New York Times, The New York Review of Books, The Wall Street Journal, Le Monde, IntranQu’îllités (Haiti), Reporte Sexto Piso (Mexico), Esquire, The Paris Review, Harper’s, Zoetrope: All-Story, The Oxford American, Sewanee Review, and elsewhere. His novel The Jacmel Wreck is forthcoming.