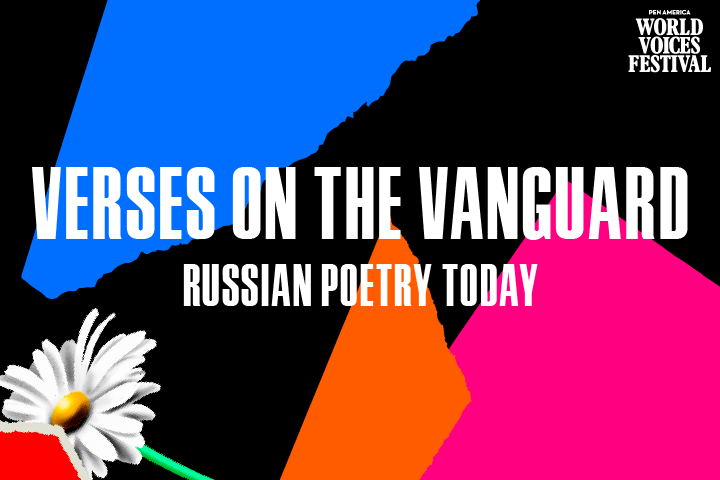 Poets and translators of Russian verse reunite for a bilingual reading as part of PEN America’s Writers in Dialogue project, which has joined some of the most daring new voices in Russian poetry with American translators to introduce their work to American audiences.

In 2020, as international travel skidded to a halt, PEN America’s Writers in Dialogue project—which opens the exhilarating world of contemporary Russian poetry to American readers by bridging American and Russian literary communities—went remote, using online connection to foster collaborations between daring emerging or under-translated poetic voices and dextrous translators. In this event, the Russian poets and American translators who were paired for this initiative reunite for a bilingual reading, for which each pair will share a poem in both languages, and join in a conversation about the pleasures, challenges, and intimacies of translation. American audiences will have an opportunity to experience the boldness and stylistic and thematic range of the work originating from a vital poetry scene. Featuring Ainsley Morse, Maria Galina, Catherine Ciepiela, Alexandra Tsibulya, Anna Halberstadt, Oksana Vasyakina, Elina Alter, Ivan Sokolov, Kevin Platt, Ekaterina Simonova, Valeriya Yermishova, and Nikita Sungatov, with Polina Sadovskaya and Polina Barskova moderating.

Presented in collaboration with Deep Vellum and the Harriman Institute at Columbia University.

Ainsley Morse is a translator of both Russian and former Yugoslav literature. Currently a professor at Dartmouth College, Morse’s previous publications include translations of Vsevolod Nekrasov, Andrey Egunov-Nikolev, and Yury Tynianov. Most recently, she co-edited F-Letter, an anthology of contemporary Russian feminist poetry (isolarii, 2020).

Maria Galina was born in Tver, Russia, but spent her childhood and youth in Ukraine. She graduated from Odessa University with a Ph.D. in sea biology, but took up writing professionally in 1995. Her novel Iramification, translated by Amanda Love Darragh, received the 2009 Rossica Translation Prize. Galina is the author of seven poetry collections and has won numerous prestigious Russian poetry awards. She is also a translator and promoter of contemporary British and Ukrainian poetry. She currently lives in Moscow and works at the Russian literary journal Novy Mir.

Catherine Ciepiela is a scholar and translator of Russian poetry who teaches at Amherst College. She is the author of a book on Marina Tsvetaeva and Boris Pasternak, as well as coeditor, with Honor Moore, of the anthology The Stray Dog Cabaret. Ciepiela is also editor of Relocations: Three Contemporary Russian Women Poets. Her translations have appeared in The Nation, The Massachusetts Review, Seneca Review, The Common, Pequod, and elsewhere. Her translation of Polina Barskova’s book of poetic essays will be published next year with New York Review Books.

Aleksandra Tsibulia is a poet and literary critic. A resident of Saint Petersburg, she currently works at the State Hermitage Museum. In 2014, after winning the Russian Gulliver Prize, she published Puteshestvie na Krai Krovi (Journey to the Edge of Blood), and in 2015, won the Arkady Dragomoshchenko Award for young Russophone poets. Her new book, titled Koleso Obozreniya (The Ferris Wheel), is being prepared for publication by the publishing house Jaromír Hladík press. She has participated in the Runokuu Poetry Festival in Helsinki (2015), the sound art and video art festival Poetronics in Moscow, and the Seoul International Writers’ Festival (2019), among other events. Her poetry is translated into English, Italian, Korean, Swedish, and Finnish.

Anna Halberstadt is a poet, translator, and trained psychologist who grew up in Lithuania. She has published numerous collections of poetry in English (including Vilnius Diary and Green in a Landscape with Ashes) and in Russian (Transit and Gloomy Sun). She has translated poetry by Eileen Myles, Edward Hirsch, and Bob Dylan, among others. She has received many awards for her writing and translations, including the 2017 Translator of the Year award from Persona PLUS journal for her translation of Bob Dylan’s poem “Brownsville Girl.” Vilnius Diary was included on the list of most important books in translation in 2017 by the Lithuanian Translators Association, and her new book of selected poems in Lithuanian translation, Transit, was named one of top 15 poetry books of 2020 by Lt.15.

Oksana Vasyakina is a poet, writer, feminist activist, and curator of creative writing courses. She was born in 1989 in Ust-Ilimsk (Irkutsk Oblast) and graduated from the Maxim Gorky Literature Institute and School of Performance PYRFYR. She has received numerous literary awards and her debut book, Women’s Prose, was shortlisted for the Andrei Bely Prize in 2016. Her book Wind of Fury was published by the АСТ, the largest book house in Russia. In 2021, her debut novel The Wound was published by New Literary Review. Vasyakina’s poems have been translated into Italian, English, and Estonian. She lives and works in Moscow.

Elina Alter is a writer and translator. Her translations of Alla Gorbunova are forthcoming in the Calico series from Two Lines Press. She is the coeditor of Circumference, a journal of translation and international culture, and an Oral History Field Fellow at the Yiddish Book Center.

Ivan Sokolov is a poet, translator, scholar, and critic from Saint Petersburg, now based in Berkeley, CA. He is the author of four books of poetry, and his work has been translated into English, German, Greek, Spanish, Italian, and other languages. Sokolov was a finalist for the Arkady Dragomoshchenko Award (2016) and has been a resident at Villa Sarkia (Finland, 2015) and the Baltic Centre for Writers and Translators (Sweden, 2019). He has participated in the Russo-German poetry project VERSschmuggel (2015), PEN America’s Writers in Dialogue translation seminar (2020), and is a member of the editorial board at GRIOZA, where he curated an international festschrift for the centenary of Paul Celan.

Kevin M. F. Platt is a professor of Russian and East European studies at the University of Pennsylvania, where he directs the periodic Russian-American poetry translation symposium “Your Language, My Ear.” His scholarly work focuses on Russian poetry, culture, and history. His translations of Russian poetry have appeared in World Literature Today, Jacket2, n+1, Fence, and other journals. He is the author or editor of several scholarly books, the most recent of which is Global Russian Cultures (University of Wisconsin Press). He was editor and lead translator for Hit Parade (Ugly Duckling Presse), a collection of contemporary poetry by the Latvia-based Orbita Group.

Ekaterina Simonova was born in 1977 in Nizhny Tagil. She graduated from the philology department at the Nizhny Tagil State Social Pedagogical Academy. She is the author of six books, including Byt’ malchikom (To Be a Boy, 2004), Sad so idom (Garden with Ice, 2011), Gerbariy (Herbarium, 2011), Vremya (Time, 2012), Yelena. Yabloko i ruka (Yelena. Apple and Hand, 2015), Dva yeyo edinstvennikh platya (Two of Her Only Dresses, 2020). Her poetry has been translated into English, Slovenian, and Ukrainian. In 2020, she was shortlisted for the Andrei Bely Prize and won the journal Novy Mir’s Anthologia Prize. She is the curator of a series of Ekaterinburg-based poetry readings called “Poetry About…,” the curator of the poetry series InVersia, and the coordinator of the all-Russian literary-critical prize Neistoviy Vissarion (Unhinged Vissarion). She lives in Ekaterinburg and works at the Sverdlovsk Oblast universal scientific library named for V.G. Belinsky.

Valeriya Yermishova is a freelance French and Russian to English translator based in the New York City area. She served as president of the New York Circle of Translators in 2015-2016 and currently teaches in the Hunter College Master of Arts in Translation and Interpreting program. She is the translator of Viktor Shklovsky’s Life of a Bishop’s Assistant and Sergey Kuznetsov’s The Round-dance of Water.

Nikita Sungatov is a poet and a coeditor of Translit, an influential literary journal based in Saint Petersburg. A graduate of the Maxim Gorky Literature Institute, Sungatov was shortlisted for the 2015 Arkady Dragomoshchenko Award, where he is now a member of the curatorial team. His book, Debutnaya kniga molodogo poeta (The Debut Book of the Young Poet), was published in 2015, and his poetry and criticism have been published in Vozdukh, syg.ma, and elsewhere.

Polina Barskova is a poet, scholar, and author of 12 collections of poems and two books of prose in Russian. She has also authored a monograph Besieged Leningrad: Aesthetic Responses to Urban Disaster (2017) and edited three scholarly volumes. Her collection of creative nonfiction, Living Pictures, received the Andrei Bely Prize in 2015, was published in German with Suhrkamp Verlag, and is forthcoming in English with New York Review Books. She edited the Leningrad Siege poetry anthology Written in the Dark (Ugly Duckling Presse) and has four collections of poetry published in English translation: This Lamentable City (Tupelo Press), The Zoo in Winter (Melville House), Relocations (Zephyr Press), and Air Raid (forthcoming with Ugly Duckling Presse). She has taught at Hampshire College, Amherst College, and Smith College. Beginning in 2021, she will be teaching Russian literature at the University of California, Berkeley.

Polina Sadovskaya, Ph.D., joined the PEN America team in 2016 as the first Free Expression Programs coordinator for Eurasia. She came to New York from Paris, where she was with UNESCO’s Division of Freedom of Expression and Media Development. She is an active supporter of women’s and youth rights around the world, and is a member of the IFEX Council. She is fluent in Russian, French, and English, and has degrees in marketing from the Grenoble Graduate School of Business and in journalism from South Ural State University.

Don’t miss @PENAmerica’s international literary festival from May 18 - 22! The @penworldvoices Festival brings together the world’s biggest and boldest writers for conversations on the power of the written word. Tickets are on sale now: https://buff.ly/2Qe0VBc. #PENWorldVoices