Points of Entry: Reporting on the Border 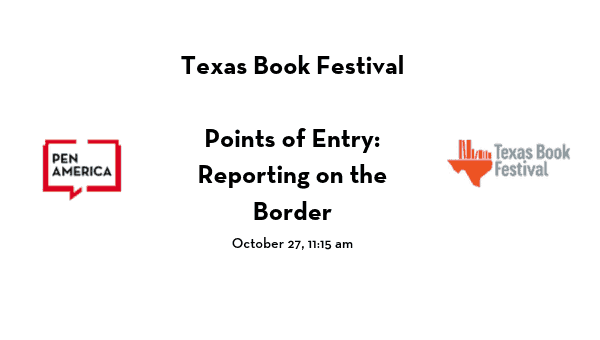 Join Oscar Cásares, Silvia Foster-Frau, Carlos Sanchez, and Dr. Jeremy Slack for a conversation that brings journalists and experts together to discuss the human rights and reporting challenges facing reporters who seek to cover news regarding immigration and the U.S.-Mexico border. From large-scale surveillance and targeting of journalists to the denial of press access to detention centers around the country, this urgent discussion will explore what experts and journalists face in finding and sharing the truth about immigration.

Free and open to the public, the Texas Book Festival is one of the largest and most prestigious literary festivals in the country, the annual event features 300+ nationally and critically recognized adult and children’s authors, 100+ exhibitors, local food trucks, family activities, and countless opportunities to meet authors and fellow book lovers.

Oscar Cásares is the author of Brownsville, a collection of stories named an American Library Association Notable Book of 2004, and the novel Amigoland. His latest novel, to be released in mid-May, is Where We Come From, about a Mexican-American family in Brownsville that reluctantly becomes involved in smuggling immigrants into the US. A graduate of the Iowa Writers’ Workshop, he teaches creative writing at the University of Texas in Austin, where he lives.

Silvia Foster-Frau As the immigration reporter for The San Antonio Express-News, Silvia Foster-Frau has broken national stories on the border wall’s environmental impact and changes to U.S. immigration policy — and their effects on migrants and communities on both sides of the border. She has investigated the technology, manpower and billions of dollars spent on border security, reported in-depth on families separated by the Trump administration, and has covered the court processes of dozens of asylum-seeking families and children. Before she took on the immigration beat, Foster-Frau was the paper’s lead reporter for the Sutherland Springs mass shooting in 2017. This year, she won Texas AP’s Star Reporter of the Year award in the large newspaper category. Last year, she won its Michael Brick Storytelling Award. A native of Galesburg, Illinois, she lived in Mexico for a year before attending Grinnell College, where she graduated in 2015 with a bachelor’s in English.

Carlos Sanchez is the Senior Editor at Texas Monthly, where he became the news and politics editor in 2018. Previously, he served as editor of The Monitor in McAllen, TX for nearly five years and as managing editor of the Baton Rouge bureau of The Times-Picayune. Sanchez also worked as executive editor of The Waco Tribune-Herald for almost 10 years and in the newsrooms of The Austin American-Statesman, Fort Worth Star-Telegram and The Washington Post.

Dr. Jeremy Slack is an Assistant Professor of Geography at the University of Texas, El Paso. He received his PhD in geography from the University of Arizona. His research is focused on deportation and the problems forced removal creates for individuals and their families, the connections to place that are severed and how it has intersected with drug related violence on the border. Dr. Slack’s work has been funded by the Ford Foundation, the Open Society Foundation, and the National Science Foundation, among others. He has published widely in journals such as Area, Antipode, Population Studies, International Migration Review, Human Organization, and The Journal of Migration and Human Security, among others. He edited In the Shadow of the Wall: Violence and Migration on the U.S. Mexico Border. His next book, Deported to Death: How Drug Violence is Changing Migration on the U.S. Mexico Border, explores the danger of mass removal from the United States.