Turn It On: Fairytale 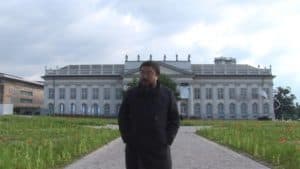 In this special closing event for Turn It On: China on Film, 2000–2017, join cocurators of Art and China After 1989 Alexandra Munroe, Samsung Senior Curator, Asian Art, and Philip Tinari, Director of the Ullens Center for Contemporary Art, Beijing, as they reflect upon their curatorial experiences and address broader themes in the exhibition and film series that touch upon China from 2007 to the present. The discussion will be moderated by Andrew Solomon, award-winning author and president of PEN America, copresenter of Turn It On. A screening of Ai Weiwei’s Fairytale (2007) immediately follows.

In 2007, Ai Weiwei took part in Documenta 12 with a participatory event called Fairytale, after the Brothers Grimm who were born in Kassel, the German city that hosts the famed art exhibition. Ai invited 1,001 people from China, many of whom had never been abroad before, to travel to Germany, live in a dormitory of Ai’s design, and freely wander the city and the exhibition. Ai’s studio recruited the applicants from the internet. He also sent 1,001 Ming period–style wooden chairs, which were arranged throughout the exhibition hall as gathering spaces. Fairytale opens with the project’s inception and takes us through its full enactment, recording the experiences of participants of all backgrounds to create a series of portraits woven together by a single event.

“Turn It On: China on Film, 2000-2017” is organized by the Guggenheim Museum in conjunction with
Art and China after 1989: Theater of the World. Presented in collaboration with PEN America. Support is provided by The Hayden Family Foundation. A program of the Sackler Center for Arts Education.