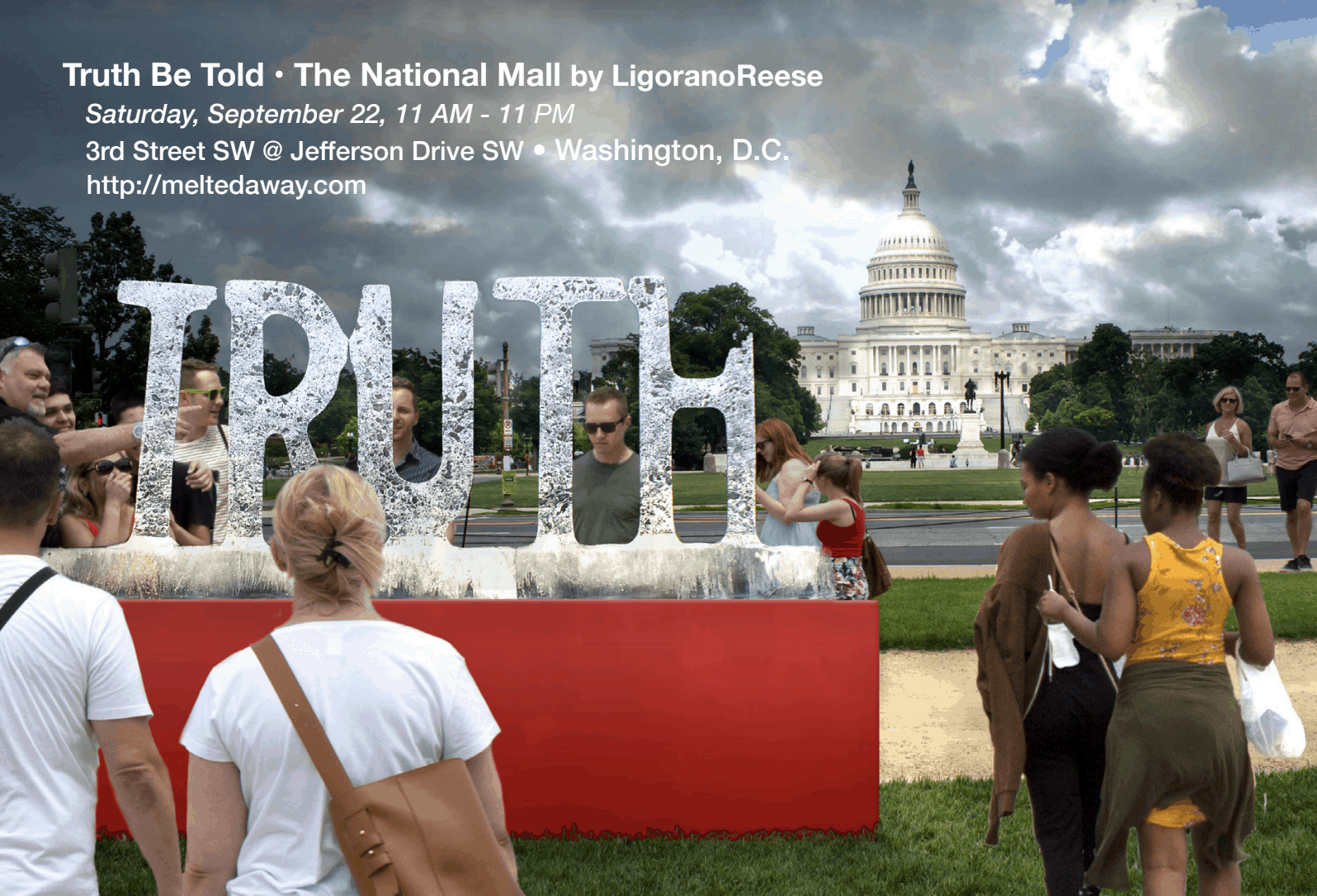 Truth is melting before our eyes. Artist duo LigoranoReese brings “Truth Be Told” to our political landscape, with a literal ton of ice in a one-word melting poem standing in contrast to the force and speed at which basic concepts of our nation’s history and governance are being undermined. What are we losing in the era of #fakenews? Combining message and medium, the unprotected work is intended to melt until it’s gone.

“Truth Be Told” is the sixth sculpture of the Melted Away series, begun in 2006. The temporary monuments are markers for the opening decades in the 21st century—first, DEMOCRACY broken, then, the ECONOMY ruined; the MIDDLE CLASS disappears, THE FUTURE is tenuous, THE AMERICAN DREAM vanishes. TRUTH is an open question.

The sculpture is the focal point for a series of public events taking place in Washington around the themes of integrity and truth. On Friday, September 21 (6:30-8:30pm), Busboys and Poets (450 K Street NW) will host the “Getting the Truth from Poems” reading with DC-based writers and poets Sarah Browning, Split this Rock, Sepideh Jodeyri, Ethelbert Miller, Chris Mason, Magus Magus, Leslie Bumstead, Mack McMorris, Casey Smith, Rod Smith, Bernard Welt, and others.

RSVP for the Panel Here »

Following the melting of TRUTH on the National Mall, artist duo LigoranoReese will convene with PEN America and Defending Rights & Dissent for the “Truth Be Told: For Freedoms 50 State Initiative” panel. The artists will discuss their massive 2,000-pound sculpture carved in ice of the word TRUTH and how its melting in our nation’s capital reflects what we are losing in this era of #fakenews. How do we claim space for the public to question the impact of contesting truth on the political landscape? How do we maintain integrity at a time when the basic concepts of our nation’s history and governance are constantly and increasingly being undermined? Does TRUTH remain an open question?

The 50 State Initiative is For Freedom’s new phase of programming from September through December 2018 during the lead-up to the midterm elections. Building off of existing artistic infrastructure in the United States, For Freedoms has developed a network of artists and institutional partners who will produce nationwide public art installations and local community dialogues in order to inject nuanced, artistic thinking into public discourse. The projects will model how art institutions can become civic forums for action and discussions of values, place, and patriotism.