[VIRTUAL] Truth Be Told: The Proliferation of Online Misinformation and Disinformation—And What We Can Do About It 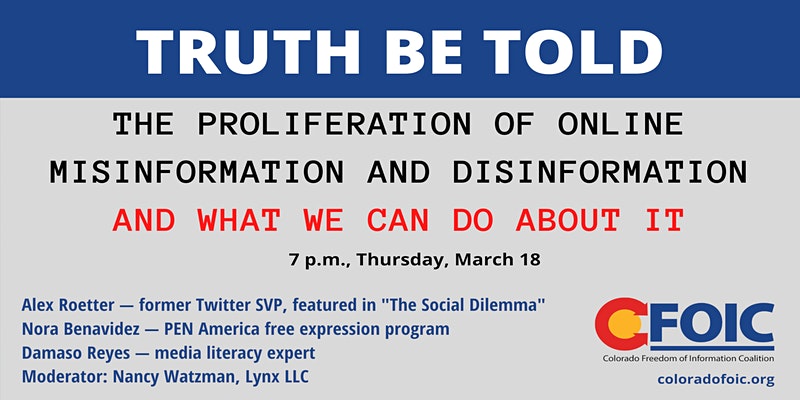 Our expert panel will address these issues and more: Why do people believe what they read online, even when it’s outrageous? What can we do to combat the effects of online misinformation and disinformation in our own lives? How do we talk to friends and family about it? What’s the role of social media platforms, political bias and polarization?

Nancy Watzman is a strategist specializing in developing and managing collaborations and partnerships to support journalists, technologists, and researchers in countering online dis- and misinformation. Clients include Cybersecurity for Democracy at the NYU Tandon School of Engineering and Democracy Fund. In 2020, she managed local journalists monitoring online misinformation working in five states, including Colorado. She is former director of and remains an adviser to the Colorado Media Project.

Alex Roetter is an adviser, angel investor, and venture partner at Moxxie Ventures. He previously was president of Kittyhawk, developer of the Flyer electric VTOL aircraft, and senior vice president of engineering at Twitter. Before that, he worked at a small wind power startup and spent a number of years at Google in a variety of engineering roles.

Nora Benavidez guides PEN America’s national advocacy agenda on First Amendment and free expression issues. She is a lawyer by training, and prior to joining PEN America, worked in private practice as a civil and human rights litigator in Atlanta. She has represented victims of unconstitutional police practices, First Amendment infringements, discrimination in public schools, and voting rights violations.

Damaso Reyes is the founder of Clarify.Media and a news literacy expert as well as an independent journalist. He was head of global partnerships for the News Literacy Project and has been published by The Associated Press, The New York Times, The Wall Street Journal, San Francisco Chronicle, New York Magazine, Der Spiegel, KSFR radio, Miami Herald, Forbes, and The Irish Times.