Translating Hamilton: Who Lives, Who Dies, Who Tells Your Story? 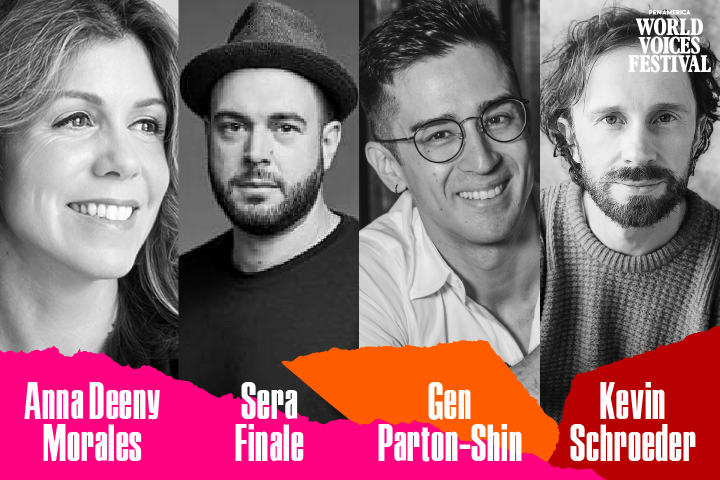 How do you translate a show like Hamilton—so steeped in American culture and history, so full of acrobatic, high-speed raps (with some songs clocking in at 200 words-per-minute)—whose lyrics, rhythms, and rhyme schemes may seem all but inseparable from the English language? As Lin Manuel-Miranda’s unprecedented smash hit goes global, with forthcoming productions in Germany and the Netherlands, and lyrical and imaginative fan-created translations popping up all over the world, Japanese performer and first-time translator Gen Parton-Shin joins two major players in the musical’s German translation team, Kevin Schroeder and hip-hop artist Sera Finale, in a discussion of the complex process of making Hamilton equally accessible and electrifying for audiences abroad. Moderated by literary critic, translator, and dramatist Anna Deeny Morales.

Presented in collaboration with Brazos Bookstore and the PEN America Translation Committee.

Kevin Schroeder is an award-winning playwright and lyricist and one of the leading translators for American musicals in the German-speaking territory. His shows have received a total of 22 nominations for the German Musical Theater Awards, winning Best Lyrics in 2017 and Best Musical in 2018. As a translator, he worked on several Broadway or West End shows, including amongst others Kinky Boots, 9 to 5, Disney’s Aladdin, Sister Act, and Legally Blonde. Upcoming works include the first foreign language production of Hamilton and the German production of Disney’s Frozen. He is also the founder of die schreib:maschine, a unique German forum to support aspiring writers and develop new original German musical theater pieces.

Sera Finale is a German musician and rapper. In addition to his recent collaboration with Kevin Schroeder on the German translation of Hamilton, in January 2021 Finale released the children’s hip-hip album Oh Yeah! under the moniker DIKKA. Finale lives and works in Berlin.

As a lyrical/literary translator of musicals, Gen Parton-Shin created the official Japanese translations of 35mm: A Musical Exhibition and subtitles for the filmed version of the Broadway musical Allegiance. Currently in the works is the official Japanese version of the musical October Sky, which will premiere in Japan this October. Parton-Shin has also been challenging himself to translate the musical Hamilton into Japanese (unofficially) for fun. As an actor, Parton-Shin has starred in numerous main stage theater and TV productions in Japan and the United States, including Rent, Next to Normal, The Last Five Years, Mitsuko, and HodoBuzz, to name a few.

Anna Deeny Morales is a translator of poetry, librettist, and literary critic. An NEA Fellow for her translation of Tala (1938) by Gabriela Mistral, she has translated works by Raúl Zurita, Alejandra Pizarnik, Mercedes Roffé, and Nicanor Parra, among others. Her most recent opera libretto, ¡ZAVALA-ZAVALA!, commissioned by the University of North Carolina at Charlotte, will debut in 2022. Deeny Morales received her Ph.D. from the University of California, Berkeley and teaches at Georgetown University. Her book, Other Solitudes: Essays on Consciousness and Poetry, is forthcoming in 2022. She serves on the board of directors of the IN Series and chairs the Gabriela Mistral Youth Poetry Competition.

In 1974, Karl Kilian opened Brazos Bookstore to encourage the growth and development of the emerging Houston literary scene with a clear focus on personalized service, community engagement, and passionate curation. As a hub for the most creative, intelligent, and engaged readers in Houston, the bookstore offers programs and curates their shelves to inspire and expand the horizons of their curious readers. They aim to connect all readers with the best contemporary and classic literature, nonfiction, art and architecture, and books for children.

State policymakers have proposed a wave of legislation over the past year that would heap fines, fees, and criminal penalties on those seeking to protest. Learn more with PEN America's latest findings: https://bit.ly/3hp7wUk.