TOWN HALL MEETING: The Role of the Writer in Trump’s America 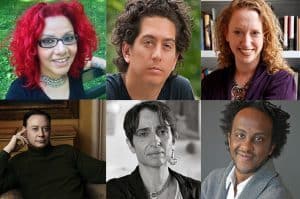 THIS IS A MEMBERS-ONLY EVENT.

In order to include all PEN America Members we will be setting up a members-only livestream feature for this event and will also take questions digitally from remote participants via @penmembership on Twitter. Details for the livestream event may be found HERE. The password for members-only livestream access has been emailed to all members from info@pen.org.

The role of the writer is being tested in an era of new and intensified attacks on the First Amendment, the discrediting of the press and journalists, and efforts to obscure and distort the truth. Writers have been at the vanguard of chronicling, interpreting, and helping shape responses to fast-breaking developments that have the potential to remake essential aspects of our politics and society.

The last few months have seen so-called fake news and “alternative facts” challenge the authority of legitimate news sources, expertise and scientific knowledge discredited, and the value of arts and culture questioned. At the same time, millions of Americans are finding new ways to express their views in protest. These developments pose important questions for the role of the writer: Do writers have any unique obligations that derived from the political challenges of the day? Should the roles of writer, artist, citizen, and activist converge? How can the breadth and diversity of the literary community be reflected without detracting from unified efforts? What obligations exist within and amongst the literary community and its sub-cultures? Does the literary community need to evolve to meet the challenges of this moment, and how?

This Town Hall meeting will begin with brief remarks from selected writers, followed by an open mic discussion among PEN America Members. While the event is PEN America’s statutory annual meeting and attendance will be limited to PEN America Members in good standing, new Members will be permitted to sign-up on site beginning at 6.30PM and join the meeting.

PEN America trustee election results will be announced at the conclusion of the Town Hall.

For those who have already reserved a seat: Seating for this event is general admission. Please arrive early to ensure your seat as space is limited.

Daniel Alarcón began working as a journalist in 2004, first in print for Latin American outlets such as Etiqueta Negra, and later for American and European publications including Harper’s, the New York Times Magazine, El País, and Granta, where he was named a Contributing Editor in 2010. In 2012, he co-founded Radio Ambulante, a groundbreaking Spanish language podcast, the first of its kind covering Latin America with long-form narrative radio journalism. Alarcón graduated from Columbia University in 1999 with a BA in Anthropology; he earned an MFA in Creative Writing from the University of Iowa in 2004. In 2012-13, Alarcón joined the University of California Berkeley’s Graduate Journalism School as an Investigative Reporting Fellow.

Mona Eltahawy is a prominent feminist writer and public speaker. She is the author of Headscarves and Hymens: Why the Middle East Needs a Sexual Revolution (FSG). She became well known during 2011’s Arab Spring when she was arrested in Cairo while covering protests in Tahrir Square, accusing her captors of physical and sexual assault while she was held in custody. Eltahawy has most recently challenged US President Donald Trump and what she describes as “politically sanctioned patriarchy”. She lives in Cairo and NYC.

Masha Gessen is the author of, most recently, The Brothers: The Road to an American Tragedy, as well as seven other books includingWords Will Break Cement: The Passion of Pussy Riot and the international bestseller The Man Without a Face: The Unlikely Rise of Vladimir Putin. She is also the co-editor, with Joseph Huff-Hannon, of the anthology Gay Propaganda: Russian Love Stories. Born in Moscow, she emigrated to the United States in her teens, then returned to Russia a decade later. After 20 years in Moscow, she relocated to New York City in 2014. Writing in both Russian and English, she has covered every major development in Russian politics and culture of the past two decades, receiving numerous awards and fellowships in the process. She blogs for The New York Times and has written for The New York Review of Books, International Herald Tribune, The Guardian, U.S. News & World Report (where she served as Moscow Bureau Chief), Vanity Fair, The New Republic, Granta, and Slate. Gessen has also edited several Russian magazines and written for many more.

Dinaw Mengestu is the award-winning author of two previous novels, The Beautiful Things That Heaven Bears (2007) and How to Read the Air (2010). He is a graduate of Georgetown University and of Columbia University’s M.F.A. program in fiction and the recipient of a 5 Under 35 award from the National Book Foundation and a 20 Under 40 award from The New Yorker. His journalism and fiction have appeared in such publications as Harper’s Magazine, Granta, Rolling Stone, The New Yorker, and The Wall Street Journal. He is a recipient of a 2012 MacArthur Foundation genius grant and currently lives in New York City.

Andrew Solomon is a writer and lecturer on politics, culture, and psychology, a professor of clinical psychology at Columbia University Medical Center, and the president of PEN America. He is the author of, most recently, Far and Away: Reporting from the Brink of Change, an anthology of his international reporting, and Far From the Tree: Parents, Children, and the Search for Identity, which received the National Book Critics Circle Award for nonfiction as well as more than 25 other national awards. His previous book, The Noonday Demon: An Atlas of Depression, won the National Book Award and was a Pulitzer Prize finalist, and has been published in 24 languages. He is also the author of The Irony Tower: Soviet Artists in a Time of Glasnost, and of a novel, A Stone Boat. His writing appears frequently in The New Yorker and in The New York Times, and he is often on NPR. His TED talks have been viewed over 10 million times. Solomon is an activist in LGBT rights, mental health, education, and the arts. He is founder of the Solomon Research Fellowships in LGBT Studies at Yale University, and a member of the board of the National LGBTQ Force and Trans Youth Family Allies. Additionally, Solomon serves on the boards of the Metropolitan Museum of Art, the World Monuments Fund, Yaddo, and The Alex Fund.