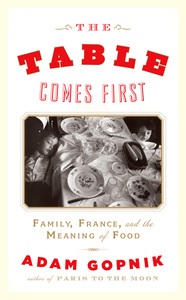 At the home of Carol and Walter Beebe

You are invited to a private dinner with writer, essayist, commentator, and New Yorker staffer Adam Gopnik. The dinner will be hosted by Carol and Walter Beebe on Thursday March 5, 2015 at 7:30pm and all contributions will go to PEN American Center.

Gopnik will talk about his book, The Table Comes First. The book, a medidation on food, is a fascinating journey to the roots of our modern obsession with food and culinary culture. From the dawn of our modern tastes in 18th-century France, where the first restaurant was born, to the kitchens of the White House to the Slow Food movement to Barcelona’s bleeding-edge molecular gastronomy scene, Gopnik tours the wild and wonderful world of cuisine, with all its concomitant sociocultural phenomena, to explore the delicate relationship between what goes on the table and what goes on around it as we come together around our food.”