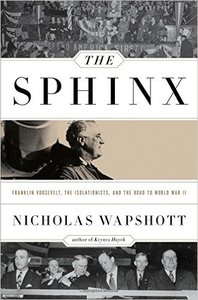 You are invited to a private dinner with British journalist and writer Nicholas Wapshott.

The dinner will be hosted by Diahn and Tom McGrath on Monday, February 1.

Nicholas will discuss his book, The Sphinx: Franklin Roosevelt, The Isolationists, and the Road to World War II, a biography of the presidency of Franklin Delano Roosevelt as he stood on the brink of a second world war. With millions of lives―and a future paradigm of foreign intervention―hanging in the balance, The Sphinx captures a political giant at the height of his powers and an American identity crisis that continues to this day.