The Sentences That Create Us Virtual Book Launch 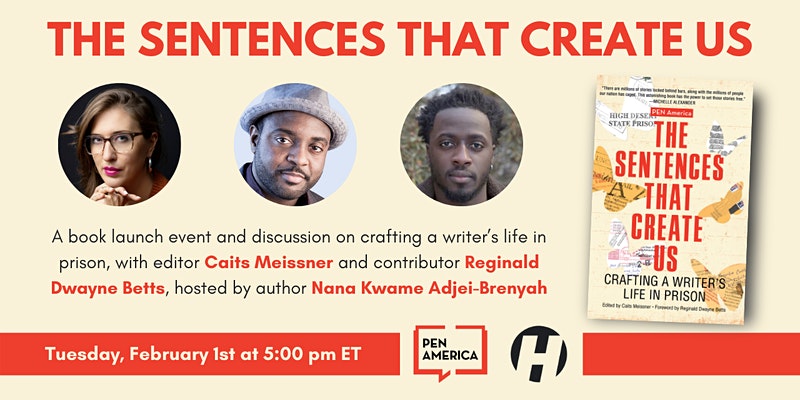 The Sentences That Create Us provides a road map for incarcerated people and their allies to have a thriving writing life behind bars—and shared beyond the walls—that draws on the unique insights of more than 50 contributors, most themselves justice-involved, to offer advice, inspiration and resources. And it’s not just for those on the inside. Michelle Alexander said in her blurb: “This is one of the best books on writing that I’ve ever read.” This transformative collection can serve anyone seeking hard won lessons and inspiration for their own creative—and human—journey.

Nana Kwame Adjei-Brenyah is The New York Times-bestselling author of Friday Black. Originally from Spring Valley, NY, he graduated from SUNY Albany and went on to receive his MFA from Syracuse University. His work has appeared or is forthcoming from numerous publications, including The New York Times Book Review, Esquire, Literary Hub, The Paris Review, Guernica, and Longreads. He was selected by Colson Whitehead as one of the National Book Foundation’s “5 Under 35” honorees, is the winner of the 2019 PEN/Jean Stein Book Award, and was a finalist for the National Book Critics Circle’s John Leonard Award for Best First Book and the Aspen Words Literary Prize.

Reginald Dwayne Betts is the founder of Freedom Reads, a first-of-its-kind organization working to radically transform access to literature in prison.

In October 2018, The New York Times Magazine published Betts’s long essay “Getting Out.” Several months later, the piece was awarded a National Magazine Award. The publication was another example of Betts entering into a new genre and bringing the same depth and richness of self-reflection and exploration of the central problem of this generation: incarceration and its effects on families and communities.

Betts transformed himself from a 16-year-old kid sentenced to nine years in prison to a critically acclaimed writer and graduate of Yale Law School. He has written three acclaimed collections of poetry: the recently published Felon, Bastards of the Reagan Era, and Shahid Reads His Own Palm.

Caits Meissner is the director of Prison and Justice Writing at PEN America. She has taught, consulted, and co-created extensively for over 15 years across a wide spectrum of communities with a focus on prisons, public schools, and college classrooms at The New School and The City College of New York. In 2017, Meissner reenvisioned the concept of book tour for her illustrated poetry collection Let It Die Hungry, pairing public speaking engagements with opportunities to work with incarcerated writers across the United States. Photo Credit: Beowulf Sheehan