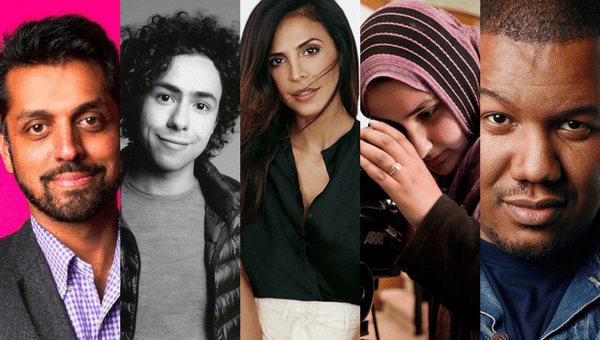 PEN America in collaboration with YouTube Space L.A. presents a special installment of The M Word series with journalist, writer, and award-winning playwright Wajahat Ali, convening a wide range of voices and key players of the film and TV industry. Our panelists are innovators, changemakers, and outspoken public figures in Hollywood who use their platforms to speak out and respond to the most pressing issues facing Muslim Americans and other communities of color.

Wajahat Ali, Ramy Youssef (Mr. Robot), Lena Khan (The Tiger Hunter), Travon Free (Him or Her, Full Frontal with Samantha Bee), Kathreen Khavari (Insecure), and Kelly Edwards (VP of talent development, HBO) will explore the varied roles artists, actors, show runners, producers, writers, and content creators choose to play when their own communities and others are misrepresented and underrepresented.

The M Word is a series funded by the Doris Duke Foundation for Islamic Art’s Building Bridges Program.

*Programming note: Due to an unforeseen scheduling conflict, Azita Ghanizada will no longer participate in the event.

Wajahat Ali is a journalist, writer, lawyer, award-winning playwright, TV host, and consultant for the U.S. State Department. His writing has appeared in The New York Times, The Atlantic, The Washington Post, The Guardian, and Salon.

Ramy Youssef is a comedian from New Jersey. His Hulu pilot based on his experience as a contemporary Egyptian-American Muslim is set to debut in 2018. He recently appeared in a recurring role in the third season of Mr. Robot and just finished filming Gus Van Sant’s Don’t Worry. He was selected for Comedy Central’s Up Next 2017 and recently made his late night debut on The Late Show with Stephen Colbert.

Lena Khan is a Canadian-American writer and director. Her first feature film, The Tiger Hunter, garnered effusively positive reviews from The New York Times, Los Angeles Times, and more. In the last year, Lena has sold a television show and directed a family comedy. She is also overseeing development for a screenplay she will direct, and is working on a children’s book. Lena is currently in the DGA Mentorship Program for Episodic Directing, paired with director Jamie Babbit.

Travon Free is an Emmy award-winning American comedian, actor, and writer. He is currently a writer for Full Frontal with Samantha Bee and formerly wrote for The Daily Show on Comedy Central and Any Given Wednesday with Bill Simmons on HBO.

Kathreen Khavari is an Iranian-American actor, writer, and producer who first gained attention when her sketch “Brain of Terror”–in which she played eleven different characters in one woman’s subconscious having an identity crisis about whether or not they’re terrorists–went viral after it was featured on Upworthy. She’s best known for her role as Issa Rae’s bitter co-worker Patricia on HBO’s Insecure, Samantha on HBO’s Big Little Lies, and for voicing Ms. Marvel (Kamala Khan) in Avengers Assemble on Disney XD. ​

As the VP of Talent Development for HBO Kelly Edwards heads up all diversity efforts above and below the line for series, films, Cinemax and miniseries. Edwards developed and runs the HBOAccess writing and directing programs which prepares talented diverse writers and directors for future success within the industry. Prior to HBO, Edwards was a key corporate diversity executive at Comcast/NBCUniversal for over five years where she oversaw over 20 divisions, launched employee resource groups, and introduced diverse creative talent to NBC, USA, Syfy, Bravo, and Telemundo. Edwards’ career has spanned both television and film having produced the movie of the week A CHRISTMAS DETOUR for Hallmark, the one hour series SEX, LOVE, AND SECRETS for UPN, serving as a network executive for UPN and Fox, and as a creative executive in features. In 2000, Edwards co-founded Colour TV, a networking group for diverse creative executives. Colour TV has now branched into Colour Film, Colour TV East, Colour Digital, and Colour Assistants, all designed to connect current and future industry executives with one another.

This event is presented in partnership with Color of Change.