[VIRTUAL] The Final Count and Implications for Free Speech 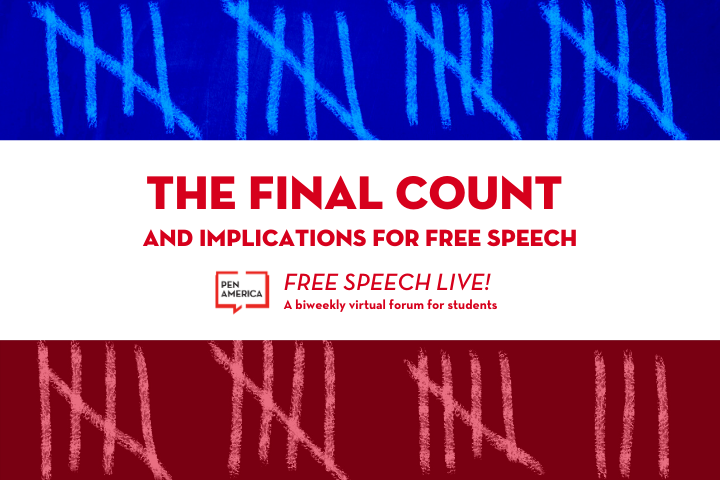 The past week has been a long month. There is still so much to unpack regarding the presidential election’s final vote count, controversies surrounding the integrity of our election system, and implications of the election results on the American free speech climate for the next few years. What do these tight races have to tell us about polarization and its possible effects on protest and political discourse?

Join PEN America’s Campus Free Speech Program for this online forum co-hosted by PEN America’s Nicholas “Niko” Perez and Veronica Tien, featuring special guest Soraya Ferdman, staff writer for First Amendment Watch, as we discuss what has transpired over the past week and what it means for free expression advocates nationwide. High school and college alumni of PEN America’s student programs and other students are welcome to join.

Soraya Ferdman graduated in May of 2018 from Brown University with a BA in history with a focus on modern America. While in college, she received the Karen T. Romer Undergraduate Teaching and Research Award to collect oral histories of aging social activists in the Southern New England area. In the summer leading up to her senior year, she worked as a congressional intern for U.S. Congressman Jamie Raskin (D-MD). After graduation, Ferdman worked at Mashable as an intern for their social good section, and later, at PEN America, as a project assistant for Free Expressions Programs. While at PEN America, Ferdman helped write and fact-check two reports on campus speech and fraudulent news. In June of 2019, she co-authored an essay for The Washington Post on the potential chilling effect of a new number of state bills targeting universities. She joined First Amendment Watch in the summer of 2019.

Veronica Tien is a program assistant with Free Expression Programs at PEN America. Before joining PEN America, Tien worked as a legal assistant at a criminal defense law firm in the San Francisco Bay area. She graduated from the University of Texas at Austin in 2018 with a double major in American studies and economics, where she researched topics involving culture, policy, and social inequity. While at UT-Austin, she also worked with Project Vote Smart and Planned Parenthood.